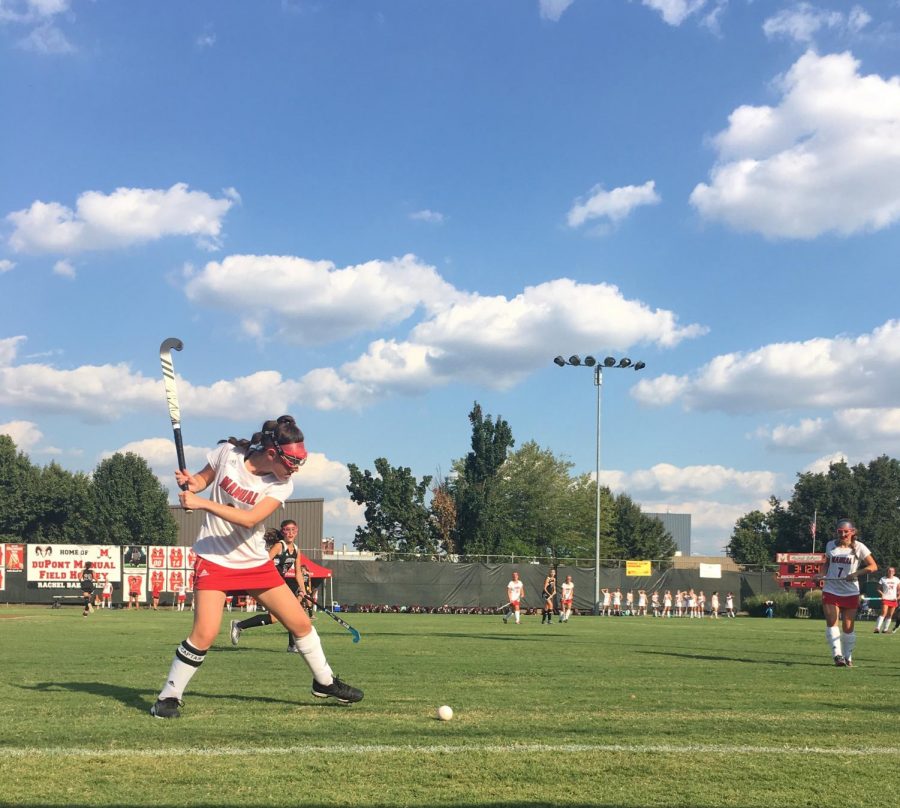 IMG_6912.JPG One of the team captains of Manual’s freshman field hockey team, Macy Carmony gears up to hit the ball back into play. Photo by Ella Dye.

Cross country:
Last Thursday the cross country team took part in the JCPS Championships. This week regionals will begin with JV participating in the Metro Louisville JV XC Regional at Oldham County on Thursday. The Varsity team will compete in the KHSAA Region 3 Class 3A meet on Saturday.

Field hockey:
Today (Sunday) the varsity field hockey team played Holy Cross at 1 and won the 4th Region Championship game. They will begin the state tournament Thursday.
Football:
Following a football player contracting COVID-19 the football team has quarantine meaning zero practice or competing in the past two weeks. This Friday the football team will host Butler with the kick-off set at 7:30.
Boys’ soccer:
Last Wednesday the boys’ soccer team defeated Central and won the 25th District Championship. Though yesterday (Saturday) the crimsons were defeated in the first round of 7th region play by St. Xavier with a final score of 1-3. The soccer team finished their season with an 11-2 record.
Girls’ soccer:
Also last Wednesday the girls’ soccer team defeated Central to win the 25th District Championship. They went on to defeat Male in the first round of the 7th regional tournament 2-1. Tomorrow (Monday) they will face Ballard at Assumption in the semifinals at 8.
Volleyball:
Finishing with a 9-2-1 regular season, the Lady Crimsons will begin the 25th District Tournament tomorrow (Monday) and host Central with game time set at 6.