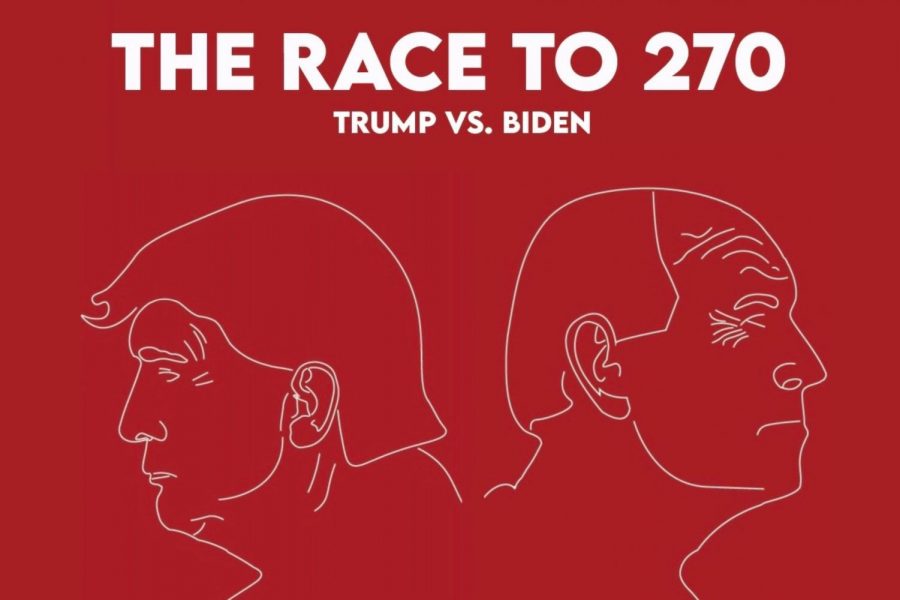 This is an ongoing article.

Update, Nov. 7, 11:36 a.m.: Almost all news sources have called the race. Joe Biden has been elected as the 46th President of the United States.

Update, Nov. 6, 8:59 a.m.: Going onto the fourth day of counting votes, Biden has taken the lead in Georgia and Pennsylvania, two states that are crucial to the presidency. If Biden wins Pennsylvania, he wins at 273 votes. More mail-in ballots are being counted, which are disproportionately democratic, which favor Biden immensely. It’s important to note though, that there will likely be a recount if the margin remains this slim in Pennsylvania and, likely, Georgia. Pennsylvania automatically recounts votes with races under a .5% lead and the president has made it clear he will do whatever to attempt to pull out a win if he loses.

Update, 3:03: According to CNN and The New York Times, Biden is projected to win Wisconsin and is currently leading in Michigan and Nevada, which would put him at exactly 270. If Trump were to take Alaska, Georgia, North Carolina and Pennsylvania, this would put him at 269 votes. There are still millions of mail-in ballots to be counted in these states though, Pennsylvania especially, which could sway the results.

Update, Nov. 4, 8:46 a.m.: Last night, President Trump claimed victory despite millions of mail-in ballots not being counted in swing states. Between CNN, Associated Press and The New York Times, Biden is leading but Trump is not far behind. The key states to look at moving forward are Michigan, Nevada, Wisconsin, Georgia, North Carolina and Pennsylvania. In almost all of these states, the races are close but mail-in ballots, which are likely to help Biden, have not been counted.

Election day is finally upon us, and RedEye is dedicated to keeping our readers updated with the most up to date information in regards to the elections. Follow along on this story to get updates on the presidential race:

Other news sources such as CNN say many of these states are too close to call.

Many of the votes being counted now are early, in-person votes, so many mail-in ballots as well as in-person votes that were cast today have yet to be added, according to CNN’s reporting.

As of now, Biden leads in Texas, Kansas, Missouri, Ohio, North Carolina, Pennsylvania and New Hampshire. Trump is leading in North Dakota, Maine, Indiana, Georgia and Florida, according to the Associated Press.

At this point, it is still anyone’s game and crucial swing states such as Michigan, Pennsylvania, Ohio, Texas and Arizona are all going to play major roles in who wins this election.

At this point, it is still anyone’s game and crucial swing states such as Michigan, Pennsylvania, Ohio, Texas and North Carolina are all going to play major roles in who wins this election.

Check back in later while RedEye continues to update this piece as more votes are counted.