What’s going on with the dress code? 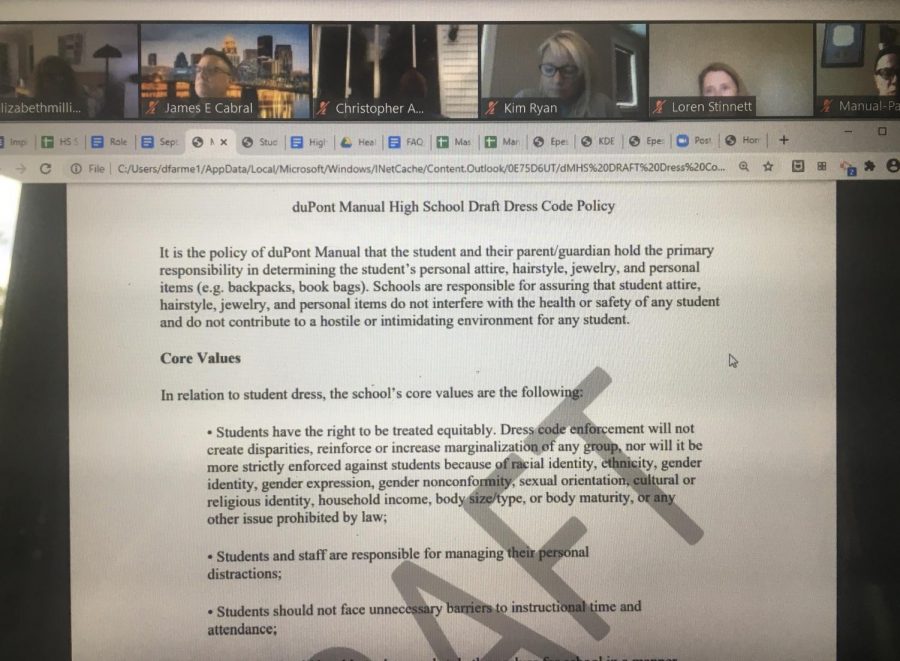 Last school year, the SBDM committee reviewed four different Manual policies and put them up against a new JCPS system. The Racial Equity Analysis Tool (REAP) is a district-provided questionnaire that policies are evaluated by, and help point out where any modifications may be needed in order to help achieve racially equitable conduct. Three of the four policies passed.

The Dresscode/Uniform REAP was sent to JCPS’s Culture and Climate Committee for additional insight and a request to draft a new dress code. Ms. Paula Boggs oversees this committee and stated that they conducted two surveys of the Manual community. Both showed that the majority of students and parents didn’t think a new dress code was required, instead, they advocated for changes that could make the current one more equitable. Culture and Climate did just that, with SBDM receiving their feedback by the August 2020 meeting.

The SBDM committee considered these suggestions but still thought the policy needed further revision to meet REAP standards. Robin Weiss, a parent on the committee, motioned to create a subcommittee dedicated to rewriting the dress code policy.

“We decided to start from scratch. The last few weeks we have fine-tuned a dress code that will not only align with the REAP but will also help ensure that no student is shamed for what they wear or their body,” said Weiss. “I think the biggest difference will be that students, mostly females, will not be shamed in class or miss instructional time. I hope this allows teachers to teach bell to bell and not be burdened with a dress code that is onerous.”

This new draft was presented at the September meeting. Principal Farmer brought up a few concerns pertaining to how violations of the code would be handled and the wearing of hoods. He emphasized the need for security personnel to be able to identify students at all times; something found rather difficult if faces are obscured.

Weiss made a motion to consider this as a first read, with a second one to take place at the October meeting. In addition, a survey was sent out via Manual’s PTSA regarding what the community thought about this rewritten version.

“This dress code policy draft is a paradigm shift from our previous policies over the past 16 years. It requires all parties to think about dress code differently and be responsible for their part in the success of the policy. We received mostly positive feedback from parents and students when the PTSA requested feedback’; however, no policy will satisfy everyone,”  said Alesia Williams, an SBDM member and Manual teacher.

Five guest speakers were present at the October SBDM meeting and were allotted three minutes each to advocate either their support or criticism of the draft.

The first speaker, Mr. Palmer, urged the committee to consider the security issues with wearing hoods and the lack of language about IDs. He was concerned about being able to identify students from the general public and keeping them as safe as possible. On the flip side, Mrs. Finley was worried that suggestions against hoods were racially motivated and could warrant exclusion and experiences of racial targeting.

Assistant Principal Ms. Lete spoke on behalf of the administrative team, expressing concern over diction choice and the need for more clarity and detailed guidelines.

Other guests, such as Manual student Sophie Stinnett (10, HSU), were in full support of how the new draft was going. Stinnett told a personal anecdote about how a dress code incident in freshman year made her and six other girls feel “objectified… disrespected… ashamed.”

Before turning the floor back over to the committee, Farmer read multiple letters he had received from parents and alumni, all in support of the revision. A motion was made to hold a special work meeting in November to take into account community feedback and what to do next.

Two November meetings have been held, one being the special work meeting where SBDM members continued meditations, with these new comments in mind. This special meeting bore a fresh, second revised draft of the policy.

The official November meeting had its first read of this second draft. Discussion among members yielded even more change, which can be viewed in the photo gallery.

Yet another virtual SBDM meeting is set to occur on Nov. 20, at 3 p.m.

“The SBDM has worked hard to come up with a policy that foregrounds three things: equity, safety, and protection of instructional time. We will need to put this draft through the REAP to ensure it passes,” Williams said.

According to SBDM member and YPAS teacher Brian Hinds, the second and final read of this second revised draft will take place at the December meeting. Until then, no new policy has been officially adopted.

“While this specific version has not yet been shown in large part to the parents and students, the previous version received rave reviews and near-universal praise from my constituents. What they loved about the new policy is largely intact in this version,” Weiss said.