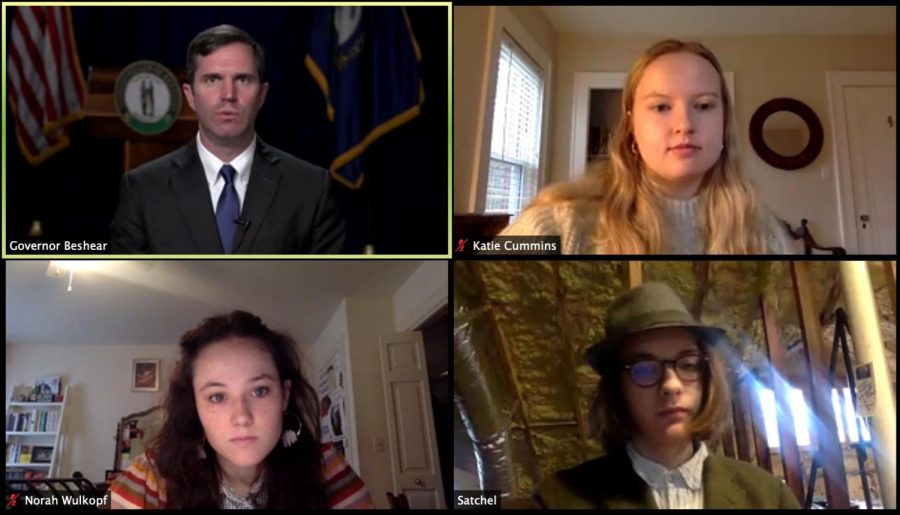 Governor Andy Beshear condemned “warrior” training and committed to consult with “a number of organizations both nationally and here in the state” when reviewing curriculum materials during state-level criminal justice training internal investigations.

In the Dec. 4 interview, RedEye reporters asked if Beshear planned to “move past” training materials that promote a “warrior mindset” and “killology” following both the Kentucky State Police (KSP) and Department of Criminal Justice Training (DOCJT) internal investigations.

Beshear replied that he was, adding that “I don’t think that the warrior mindset is an appropriate mindset for law enforcement today,” Beshear said during an interview on Dec. 4. “I worry about their safety, but that training has to be balanced” against the need for officers to defuse situations.

“Killology” is a military and policing philosophy created by Dave Grossman that argues the psychological reasons one may kill — for example, fear or hatred — can be used to train officers to kill without remorse.

Beshear’s comments come after RedEye reported on KSP training that quoted Hitler and advocated “ruthless violence” for at least two years, the use of quotes from Robert E. Lee in KSP trainings for at least 10 years and a DOCJT training that included a Nazi symbol and used video created by an anti-Semitic organization. KSP Commissioner Rodney Brewer resigned after the first story was published.

The governor reiterated his promise to conduct a thorough internal investigation of materials used in law enforcement training. He further indicated that the review of materials would extend beyond police officers to other Kentucky Justice and Public Safety Cabinet personnel such as corrections officers, but did not provide a specific timeline for the investigation.

Beshear also stated that many members of his administration were shocked by the hate symbol in the training material, including DOCJT Commissioner Nicolai Jilek.

“He was appalled, believes that it is unacceptable, and is committed to having not only the right but the best training in the country,” Beshear said.

However, Jilek’s name appeared below a signature line on the printed contents of the curriculum, indicating that he was responsible for its approval. The digital copy of the document DOCJT provided to RedEye did not have a handwritten signature.

In an interview with RedEye last week regarding the DOCJT training video, Representative John Yarmuth called for Jilek to be accountable.

“The governor ought to fully investigate this and get rid of people who perpetrated this or allowed it to happen,” Yarmuth said. “I think Mr. Jilek has a lot to answer for, and it’s got to come from the highest levels.”

In the RedEye interview, Beshear did not commit to further personnel changes and did not have answers to questions about the investigation into the DOCJT training video.

The governor said corrective measures would include reviews of training materials by outside organizations.

“We’re actually arranging a call where certain representatives of those groups will have direct access,” Beshear said. “Not just to those that are looking through the materials, but also to the commissioner of the state police, the head of the DOCJT. Again, we want this to be open, transparent.”

Beshear declined to specify which organizations the governor’s office was speaking to in tandem with the two law enforcement agencies but said these groups have been invited to review the materials alongside department leadership. Specifically, the governor said he is depending on these groups to increase accountability and ensure leadership has “a full understanding” of symbols of hate.

“When I became governor, there was only one class at the DOCJT on any type of cultural awareness or understanding of different communities and that was only for the 911 operators. We changed that even in the midst of COVID, but what we have done still probably isn’t enough, and we want to make sure it’s as effective as it can be,” Beshear said.

The DOCJT presentation that included the instructional video produced by an anti-Semitic group was also given to 911 dispatchers this year.

Moving forward, Beshear said he plans to implement training that goes beyond cultural awareness education. During the June 8 daily COVID-19 press briefing, Secretary for the Governor’s Executive Cabinet Michael Brown said that DOCJT was developing an eight-hour online training that would address implicit bias, the use of force, civil rights laws, ethics and accountability, emotional intelligence and community relationships. [The curriculum for that training is embedded at the end of this article.]

Brown said the training is an eight-hour online course that will be completed by the end of the calendar year. The COVID-19 pandemic halted in-person training, and this eight-hour online training was put in place of the normal 40 hours required. His spokespeople later provided a list of topics included in the new training to RedEye.

Beshear stated that he hoped Kentucky’s reforms could make the state a national example for policing and police training.

“We all want to get to a place where every community believes that law enforcement is there to protect them and in their best interests,” Beshear said. “We all have to want to improve.”