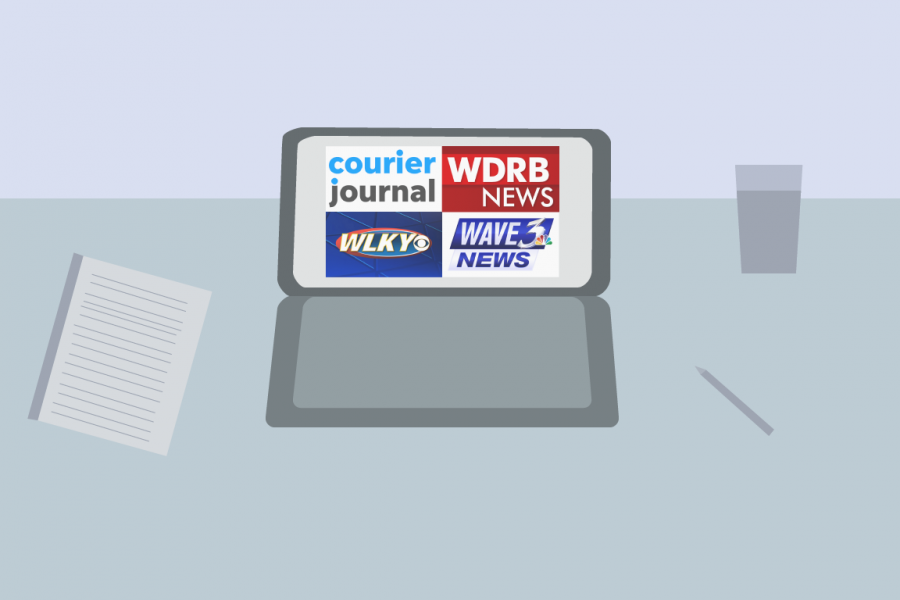 Conversely, The Courier Journal and WFPL provide more detailed, in-depth coverage spanning a narrower field of topics. Often, The Courier Journal and WFPL utilize an investigative approach, building on a story over the course of several days or weeks. WDRB provides its audience with pieces that can be consumed in a short amount of time by sharing only select details, unlike the more comprehensive pieces from The Courier Journal and WFPL.
Newsworthiness
Newsworthiness is the usefulness, importance, and/or relevance of a story or article. Any “fluff” or “celebrity” stories are non-newsworthy. An example of a fluff story is “Today is National Pug Day,” which WAVE covered. While National Pug Day is cute, it does not provide the public with any useful information. Less fluff stories usually indicate that a source is more reliable and focused on reporting the stories that are truly important. 5 percent of the stories WDRB reported were fluff, putting them in second place for newsworthiness, just behind WFPL, with only 1.2 percent fluff stories.
Local Relevance
Local relevance is the scale of how well an outlet reports stories that are relevant to its community. WDRB focuses mainly on stories that concern “Kentuckiana,” so an example of a non-locally relevant story would be “Wisconsin trooper stops driver hauling snowmobile atop car.” However, generally speaking, government and health stories are almost always locally relevant, regardless of where they take place.

Overall, WDRB, as well as most of the other outlets, had very few instances reporting stories that were not locally relevant. WAVE, however, shared a great deal of stories that were irrelevant and insignificant to citizens of Louisville, such as“Groundhog vs. bobcat standoff caught on camera in Conn.”

WATCH | A gutsy groundhog faced off with a bobcat and it was caught it on video >> https://t.co/kp11LbmMkO

A grandfather accused in the fatal fall of his young granddaughter from an 11th-story window of a cruise ship docked in Puerto Rico last year has pleaded guilty to negligent homicide >> https://t.co/9QOI047ZyB

The exterior of this Lakewood Ohio home doesn’t give any idea the eye-popping 1970’s and 80’s designs that rest behind its doors. https://t.co/h9ddIUfGZT

Civic contribution
Civic contribution is the extent to which outlets/reporters keep an eye on government officials and hold them accountable. While only 22 percent of WDRB’s stories (about half as much as The Courier Journal and WFPL) concerned government and politics, they actually reported more government stories than any other source, with WLKY in second. This does not necessarily mean that WDRB’s stories were any more accurate or reliable than others, but it does show that closely monitoring government activity is one of their top priorities.
Fairness
Fairness measures the underlying biases within an outlet’s coverage of certain stories, in other words, how fairly they represent/portray the people and events they cover. WDRB fell short when compared to other outlets.. For example, when shots were fired at Black Lives Matter protesters in Jefferson Square Park, WFPL published a descriptive and detailed article describing the exact events that occurred, while WDRB published only a few sentences, saying only that someone fired shots at a protest in Jefferson Square Park. This would be considered an unfair representation of a story.

WFPL included important details in their story that WDRB omitted, such as the fact that the shooters were a group of white men that circled the gathering in a car holding a large Trump 2020 flag firing several shots into the air. WFPL also included several quotes from witnesses of the event, including State Rep. Attica Scott, and published a more accurate and informative article. In contrast, WDRB published a vague, four-sentence statement that offered little to no enlightenment for the reader.

The next day, The Courier Journal published a piece about the same shooting, including a statement from an unnamed protester who claimed that another protester fired at the vehicle first, and the car circled around several times shooting into the air. WLKY published a similar article, meanwhile WHAS and WAVE did not cover the story at all. The piece published by WDRB was vague and unfair relative to other articles about the same event.