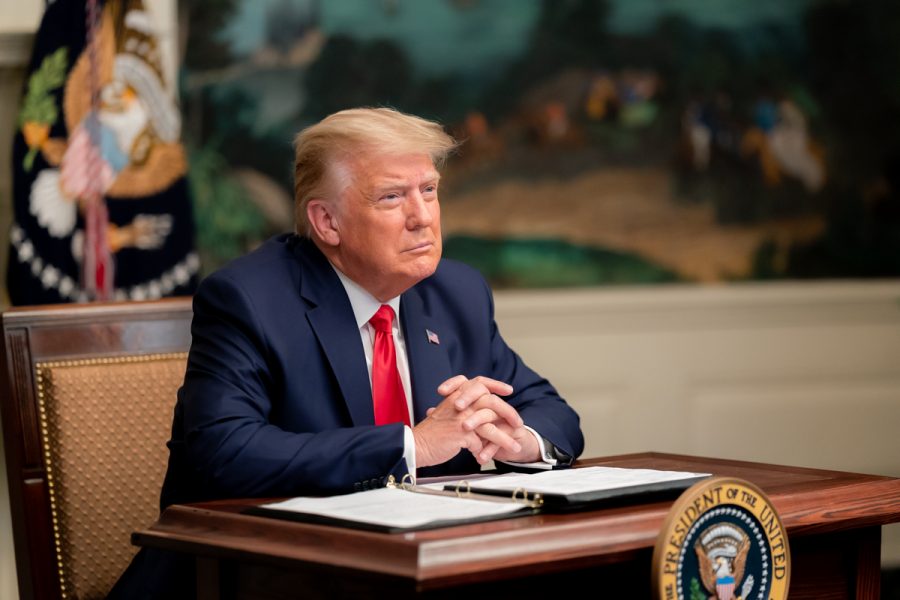 President Trump talks with military personnel over a video call.

The President’s precedents are very dangerous. Over the last four years, our president, Donald Trump, has made many headlines and brought drastic changes to the nation and Washington. Regardless of whether you think his policies are best for the country—full disclosure, I do not believe they are—I am here to argue that the president has broken many conventions of government and the presidency. Some people think there are precedents in government that need to be broken. In some cases, I’d agree. However, the current president has challenged and broken so many unspoken rules that it may be threatening to our entire democratic system.

Let’s look at some of the things that have happened during Trump’s tenure as president. We’ve had a government shutdown leveraged for political gain and a president cast doubt over the electoral process. We’ve had a president claim victory in the election by also claiming that there are millions of illegal ballots being counted and the attempted imposition of a travel ban on many Muslim countries because of the alleged risks of terrorist attacks.

Many of us in the US have become desensitized to news like this. It’s almost expected for something unprecedented to come out of the White House every week or two. But this subversion of norms may cause extreme, and maybe even irreparable, damage to our democracy.

I say this because the more often something happens in politics, the more acceptable it is for that thing to happen again. If there is a government shutdown that’s politically charged in the future, people will look back to the similar situation of our most recent shutdown. When another candidate loses a close and controversial election, they may point to the claims made by the president as evidence of voter fraud.

These things might first seem small, but they can become terrible problems over time. Let’s take the example, first, of the government shutdown. Government shutdowns used to be rare, almost unheard of, with the first true shutdown as we know it happening in 1980. Since 1980, they’ve happened much more frequently, and in just the last two presidencies we’ve had three shutdowns, including the longest and third longest in history. Shutdowns are terrible, and we do not want more of them.

Looking at the actions of our government from 2018 to 2019, it’s not out of the realm of possibility to say that someone might try to use a shutdown for political gain again, and the more it happens the more acceptable it becomes. In the long run, this could lead to financial hardships for many Americans, the firing of federal employees and the decimation of important public services due to lack of funding. If this becomes commonplace, it would heavily damage the federal government’s reputation and make faith erode even further as politicians prove that their squabbles and personal gain matter more to them than the American people.

And now the scarier example. Applying the line of reasoning I just used, what happens if more and more politicians start claiming that their elections are rigged? The consequences could be catastrophic. What might begin as an attempt to win a close election will inevitably sow doubt in the mind of voters as to the system’s legitimacy, and if this is repeated, people will begin to doubt whether their vote matters at all. If there are constant claims of fraud, or worse, growing amounts of actual fraud, then you might end up with a population that feels like it doesn’t get to elect officials anymore.