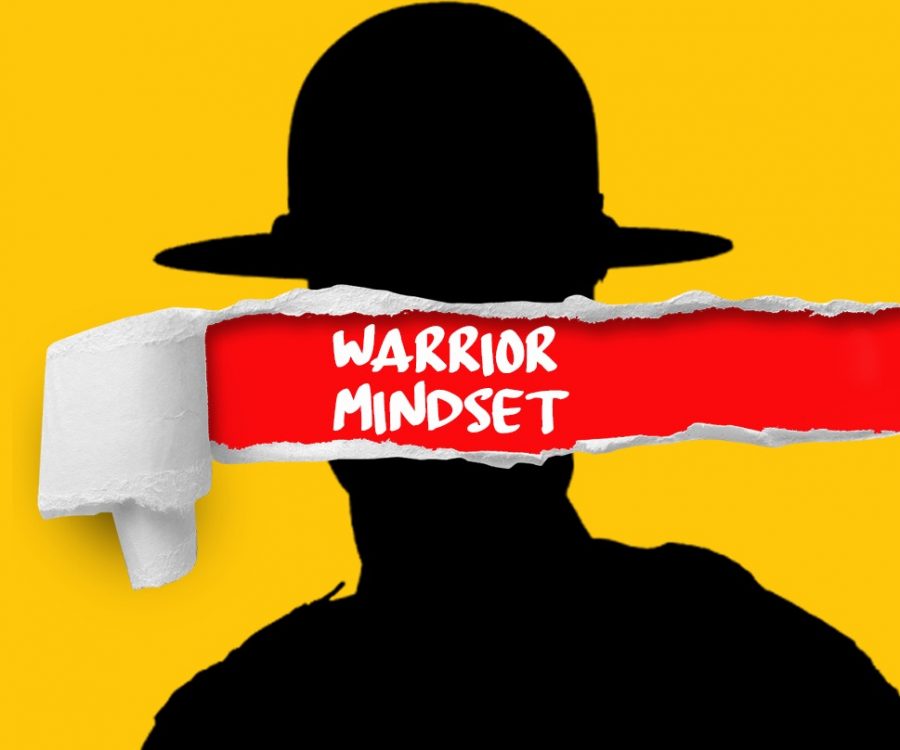 The "warrior mindset" has been ingrained into KSP officers through the use of training presentations quoting Hitler. Design by James Jean-Marie.

This year has been unique, to say the least. It was marred by a global pandemic, a tumultuous presidential election that is still being contested to this day, large-scale racial justice protests and complete upheaval of many American’s daily lives. This disruption has widened existing cracks in the system, forcing many to address them for the first time.

One topic has caused both sides of the political spectrum headaches: police. Although we are not here to discuss the overarching systemic problems that exist within modern law enforcement, there is evident reason to highlight the extent to which police are trained to be warriors.

The issue of police brutality has affected many people within the state of Kentucky, most notably with the murder of Breonna Taylor and further social justice movements with the call to hold our police accountable. Manual RedEye obtained training slideshows from the Kentucky State Police that quoted historical figures such as Adolf Hitler and Robert E. Lee. The slides also promoted a mindset of “ruthless” violence.

The racist training quotes historical figures who should most certainly not be in any way, shape or form in a police training slideshow. At first glance, the slides are horrible in nature, and one would really question their ability to have faith in Kentucky State Police officers. As students, we would have extreme discomfort being educated with materials that promoted such an evil person in history, so those same standards should certainly be used with the people designed to protect us. They were quite literally trained to be “ruthless killers” and to “meet violence with greater violence.” And let us not forget the use of Hitler quotes within the presentation. This is unacceptable, especially when lives are at risk.

According to the Washington Post database on police shootings, KSP troopers have committed at least 16 fatal shootings since 2018, the most of any force within the state. What does that say about KSP? One could make the argument that their approach to policing is working — but backward. The job of the police is to simply enforce the laws and protect their people, preferably without having to use lethal force; since KSP troopers were taught the exact opposite, of course, incidents that ended fatally occurred more.

There have been other slideshows as well, such as one last edited in 2011 and created in 2001 which continued the praise of the “ruthless” violence mindset. Although it is unclear which specific materials were added or deleted, or how many times it was used, at least 60 cadets in 2011 were trained using this material. This is not only frightening to hear but it’s also extremely dangerous for the general public with which these troopers interact with. Additionally, the attitudes within KSP following the obtainment and release of the slideshow do not make the situation any better. The lackluster responses and false claims of an isolated incident indicate a deeper issue within law enforcement in general.

It’s not just KSP under fire in the state. The Kentucky Department of Criminal Justice Training used a video that depicted Nazi symbols and overall general misconceptions of Jewish people. This is an anti-Semitic mindset used to demolish anyone within its path and is even more heavily targeted toward minority communities. Even if this “tough on crime” or “meet violence with violence” mindset intends to mitigate crime and strengthen the police, it ends up doing the exact opposite. We are a state of four million people that represent every religion, race, ethnicity, and background. We can’t let government institutions — especially one of the biggest police departments in the state — off of the hook. We as journalists and, more importantly, you as people have an obligation to hold your government officials accountable because they are directly responsible to you, elected or not.

There is no doubt that we have a huge problem with police brutality, and now, police mindsets, and there is so much we have to get done to change that attitude.That, of course, starts with training. We need further government oversight when it comes to police training; we can do that through independent commissions composed of community organizers, members of police forces and professionals who have knowledgeable understandings of how to better train police. They could draft materials for states and local police forces to use that are neutral in content and don’t quote historical figures who are objectively bad people.

However, fixing the training isn’t enough. There are current KSP officers that were trained with these materials that are still doing their jobs with the warrior mindset in their mind. There needs to be mandated training as well to potentially reverse the hate and violence ingrained in police officers the moment they start training to be one.

There is an inherent problem in the way Kentucky police officers have been trained in the past.  We fear that this is not the last we will see of violent or potentially racist training materials in the state or across the country. We feel this storm will never end, that we will take two steps back every time we take one step forward. It’s a vicious cycle that needs to be stopped. This starts with putting people in power willing to hold law enforcement accountable. Put pressure on your elected officials and tell them you want change within our police system. Call your local and state police forces and tell them they should change their practices. Change is slow, momentum must be built and relationships must grow, but with persistence, change can and will happen.