OPINION: We need to give this new schedule a chance 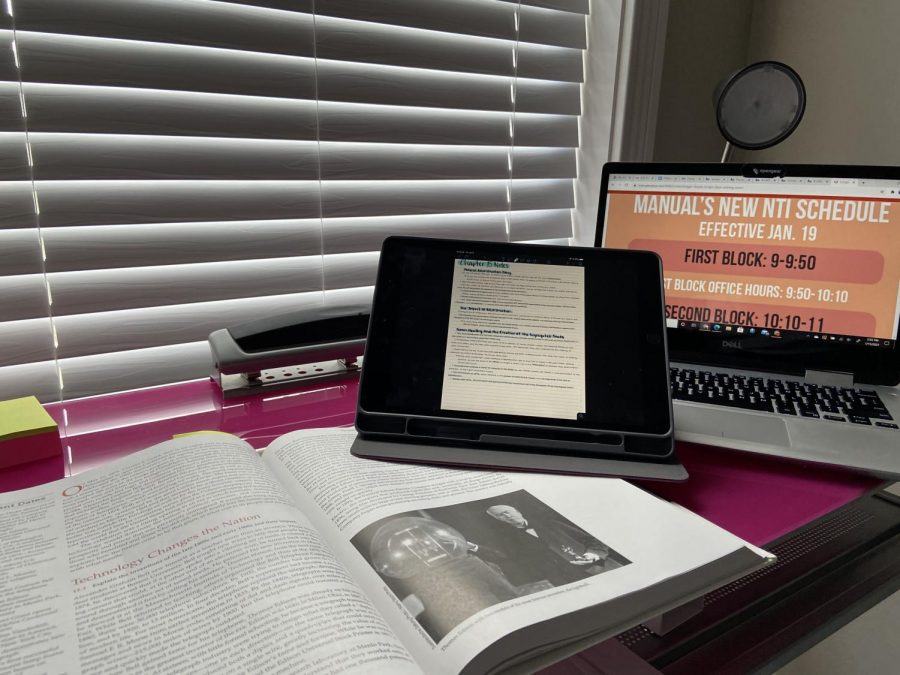 Earlier this week, the school administration released a new second semester schedule that will take effect starting January 19. This will switch all students to a five-day red/white schedule with 50 minute class periods and two meetings per class each week, while keeping Wednesday as Crimson Day. Manual’s administration hopes this new format will be easier on students and help mirror the in-person schedule, for whenever students may return to in-person.

However, the new schedule received negative feedback from the student body on Instagram. Though many students have negative views on the second semester schedule, there are still some positive things that can come out of it and be acknowledged.
Con- Longer class times
Each class has been extended by ten minutes so teachers can get more done. Technically, an additional ten minutes won’t do much for teachers nor students since the instruction taught in class wasn’t effective anyways. What’s ten extra minutes really going to do?

Besides, many students are not excited about having longer class times because it adds to the stress. Teachers are still going to give students the same workload they have given during the first semester and students will still have to teach themselves the material because teachers still won’t have enough time to get enough classwork in. This will be more stressful for students.
Con- Getting used to the new schedule
Students have already gotten used to and more comfortable with the original schedule after having been on it so long. Having a new schedule will take a toll on a student’s mental health and disrupt a set routine. On the original schedule, some students wouldn’t have class until noon. This would give them extra time to prepare for or get any remaining work done before the class started. Extra or spaced out time from the first schedule also allowed students to relieve any stress they had from the day before. With the new schedule, students no longer have this option and would have to wake up earlier then needed to prepare for class and get any work done.
Pro- Reflection of in-person school
The main purpose of this new schedule is to have a better transition from NTI to in-person school, which is prosperous as the COVID-19 vaccine is being distributed throughout Kentucky. The new schedule will offer students an idea of what in-person school will be like when we’re able to return to the school building. Mr. Klingenfus, the sophomore assistant principal, commented on this in Longer classes, longer days coming soon.
Pro- More effective
The first semester schedule had either two 40-minute classes or one 80-minute class a week. Being at home during a 40-minute class is not that bad, but when things extend beyond an hour, it’s harder to concentrate on the content at hand. Having a 50 minute class is better concentration-wise since students are less likely to zone out. Two classes instead of one a week is also more effective because students are less likely to forget what was being taught in class the week before.