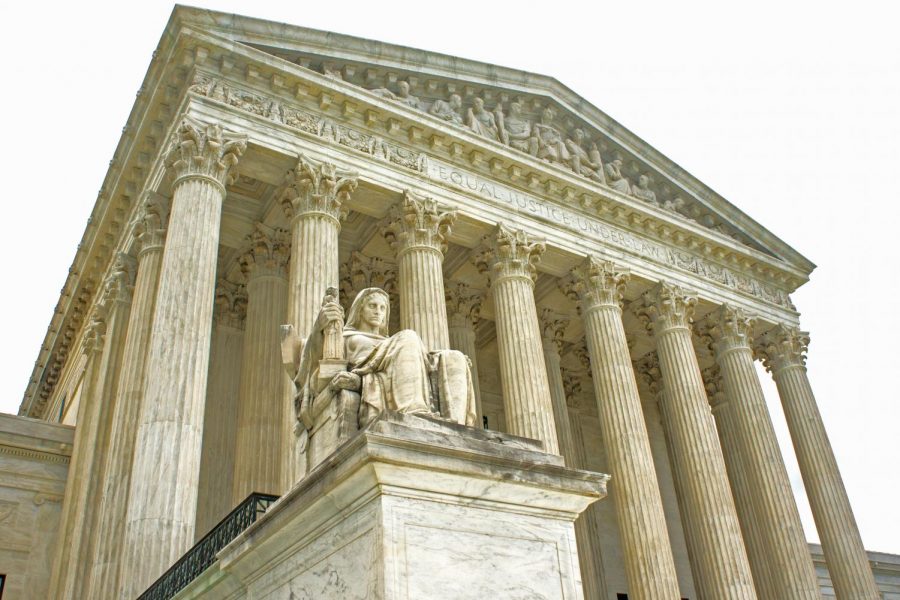 Photo of the Supreme Court building showing the Contemplation of Justice.

The Supreme Court plays an important role within society. They interpret our laws and hold the final decision for many, many issues from fundamental rights, to very narrowly interpreted statutory cases. But there are some which stand out the most and impact society for the greater good.

Before Marbury v. Madison, the Supreme Court was fairly weak, as it had not had many cases and they had a fairly limited role within the Constitution under Article III, an Article that gives the judicial branch its powers. This case gave the Supreme Court its judicial review power. John Adam’s lost the election 1800 to Thomas Jefferson, at a last-ditch effort, Adams and the Federalists controlled Congress looked to essentially pack the courts. They passed the Judiciary Act of 1801 during the lame duck period which created new courts, added judges and gave the Executive more power over the nominations process. All appointees were confirmed by the Senate.

The Supreme Court took up the case and decided that Madison’s refusal to deliver the commissions was illegal and that it was proper that Courts could do that. However,  Marshall found that Madison did not have to comply because the section of Judiciary Act of 1789 that gave the Supreme Court the jurisdiction to take this case was unconstitutional. This established judicial review, the act of a court to strike down laws–or sections of laws which do not comply with the Constitution. This case greatly expanded the power of the Court and led the way for the judicial branch to have a greater influence within society.

Brown v. Board is perhaps the most important Supreme Court decision of the 20th century. A consolidated case from Kansas, South Carolina, Virginia, Delaware and Washington D.C. In each state, there were statutory provisions that allowed public education to be segregated on the basis of race. The people in favor of the separate but equal doctrine used stare decisis and maintained the status quo position from Plessy v. Ferguson which allowed public segregation. Plaintiffs believed that the separate but equal doctrine was unconstitutional under the 14th Amendment Equal Protection Clause.

The Court decided in a unanimous opinion that the separate but equal doctrine indeed violated the Equal Protection Clause. They reasoned that segregation of public education based on race instilled a belief of inferiority that has a negative effect on the advancement of African Americans. Chief Justice Earl Warren wrote the unanimous opinion and used many sorts of social science studies to make his argument due to his inability to use precedent because he was overturning years of misguided precedent.

This case led to the increasing reliance of Courts to finally take action on civil rights issues and led to a series of Warren-era cases that expanded civil liberties and dignity of minorities.

Another consolidated case facing serious social impact. In Ohio, Kentucky, Michigan and Tennessee same-sex marriage was prohibited. Groups from these states sued and said that these bans of same-sex marriage violated the 14th amendment to the Constitution, more specifically, the Due Process Clause and the Equal Protection clause. Each group won in trial courts, but when consolidated, the 6th Circuit reversed saying those states did not violate the 14th amendment. That decision appealed and the Supreme Court took up the case.

Regents of the University of California v. Bakke (1978)

35 years old Allan Bakke, a Vietnam War veteran was rejected from the University of California medical school. Every year the school accepted 100 people and 16 had to be from a minority group. He saw this as “reverse racism” and discrimination based on race because he had better grades than the 16 people selected. He sued all the way to the Supreme Court and they accepted.

In a 5-4 decision, the Court stated that Bakke should be accepted, but also said that race could be a factor within admissions processes to take into account the need for racial diversity. There were six opinions in total with justices each explaining their views. In a joint opinion, Justices Brennan, Marshall, White and Blackmun concluded that “the government may take race into account when it acts not to demean or insult any racial group, but to remedy disadvantages cast on minorities by past racial prejudice.” Under their understanding, any college admissions criteria to remedy the past of racial segregation was Constitutional. Four justices dissented based on the fact they thought the Court went too far and would have prefered a narrow ruling based on this specific case not the underlying question of affirmative action.

At the protest at the Republican National Convention in 1984, Gregory Johnson lit an American flag on fire. Under Texas law, that was prohibited and he was sentenced to a year in prison and was fined $2,000. He appealed and said that the law was unconstitutional under the Speech and Debate Clause of the 1st Amendment

In a 5-4 decision, the Supreme Court decided that flag burning was protected under the First Amendment. In an opinion by Justice William Brennan, the Court reasoned that expression of beliefs was speech too and that it was the cornerstone to American’s free speech rights. Justice Anthony Kennedy wrote a concurring opinion stating that he disagreed with the action of flag burning, but his personal feelings do not make his judicial rulings and that the separation between the two is what enhances the judicial branch in our society. This case reaffirmed the idea that unpopular is protected under the Constitution.

Featured Image Citation: “US Supreme Court Washington DC” by dog97209 on Flickr is licensed under Creative Commons Attribution 2.0 Generic. No changes were made to the image. The use of this photo does not indicate photographer endorsement of this article.