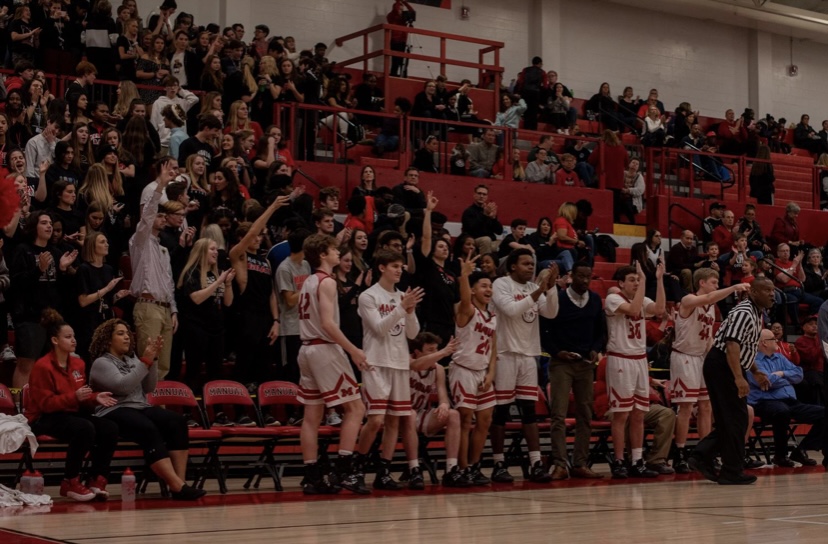 Fans and teammates cheer on the team during the homecoming game against Central. Photo by Cesca Campisano.

Last year the boys’ basketball team finished with a 14-14 season which ended with a loss to Ballard in the first round of the Seventh Regional Tournament.
The Crimsons also lost Eli Roberts who went on to play at Bellarmine University this year. Roberts averaged 10.7 ppg (points per game) and 5.6 rpg (rebounds per game) last year for Manual.

Top returning seniors for the team include Parker Smith with 7.7 ppg and rpg and Brendan Shene averaging 6.6 ppg and 4.4 rpg last year.

BOYS’ BASKETBALL: Crimsons getting a workout in today in Butch Charmoli Gymnasium. pic.twitter.com/s8NPe9wt6q

On the other hand, former head coach Jimmy Just stepped down in April with a 216-175 record after his thirteenth season with Manual and was replaced by Miquel Coleman.

Before Manual, Coleman coached at Seneca where he obtained a 51-40 record and has experience playing collegiate level basketball including Columbia (Missouri) College and Indiana University Southeast.
Girls’ basketball
The Lady Crimsons finished their year with a 25-8 record and a 57-38  loss to Sacred Heart in the Seventh Regional semifinal last year.

This year they will be led by junior forward Kennedy Lee and coach Jeff Sparks who is in his eighth year of coaching for Manual.

Overall in Coach Sparks’ eight seasons coaching for Manual he has won the Seventh Regional Championship twice and a 153-62 record.

Kennedy Lee is currently ranked 11 in the state for girls basketball and averaged 12.2 ppg while shooting 49% and 9.6 rpg.

Other key players include the young backcourt of Jakayla Thompson with 9.5 ppg and 3.4 rpg and Sydne Tolbert averaging 8.8 ppg and 2.6 rpg last year.