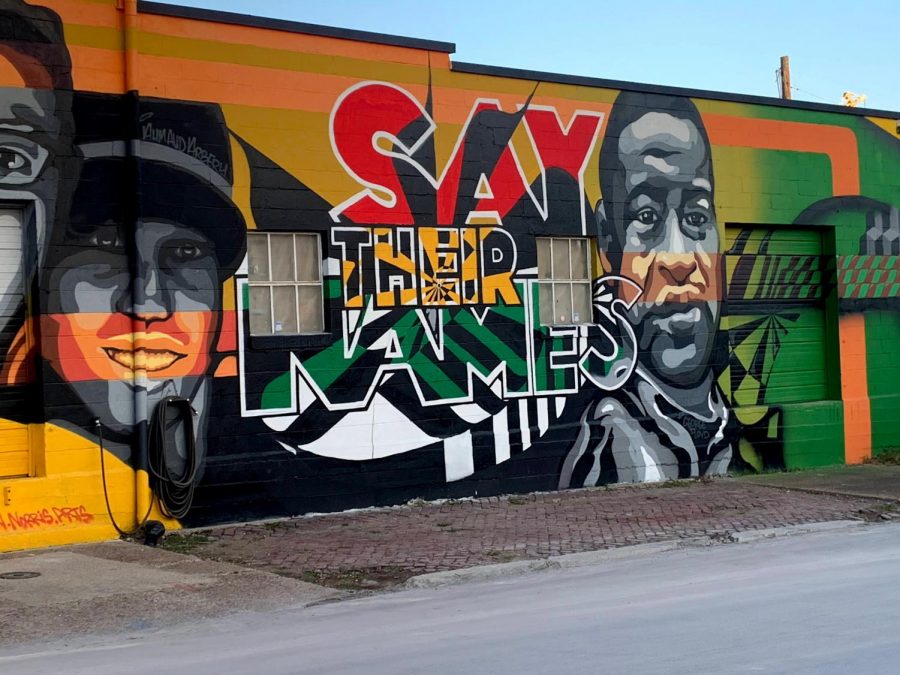 A mural memorial for Breonna Taylor, Ahmaud Arbury and George Floyd, located on 11th and Main street in Louisville. Photo by Payton Carns.

I’m going to be completely honest: one of the happiest times of the past year was when America elected Joe Biden as president, finally defeating four years of destruction. I remember scrolling through Instagram and watching videos of people dancing through the streets of the city with beaming smiles on their faces. I watched my mom sigh with relief and tear up, and I remember smiling for the rest of the day.

The euphoric-like feeling of defeating the incumbency, in my opinion, was well-justified. Watching a man who took our already divided country and made it worse — not to mention the poorly-handled pandemic — leave office deserves a celebration. We deserve that relief and that joy after four years of America’s leader throwing tantrums on Twitter. For a lot of us, Joe Biden wasn’t our first choice; with a young, diverse set of candidates, I was hoping for someone who appeals to the younger generation a bit more. But when it came down to it, the most important thing was getting Trump out of office.

Like I said, feeling joyful about the transition of power is valid and justified. However, at the same time, we need to remember the current social and political climate we’re in — one election isn’t going to fix that. While I’m so grateful we have a new, promising leader to unite and heal America, change isn’t going to happen overnight. I think back to just months ago when the call for justice of Black lives erupted across the country — we felt it in our own city after the death of Breonna Taylor. That call for justice didn’t change at noon on January 20th. The fear of corrupt cops abusing their power didn’t dissolve when Trump walked out of the White House.

President Biden has promising plans to support Black people in this country, but until we see that active change, we need to hold him accountable. African Americans are still disproportionately affected by COVID-19; they are six times more likely to die from COVID-19 in counties with a white majority, as reported by the Washington Post. Biden also has a racist past — from opposing integration to endorsing the 1994 Crime Bill, these aren’t things we should be ignoring. While change is possible and President Biden has shown evidence of that, he needs to put full focus into how he can make America safer for Black people. The system that black people live in today is a product of centuries of blatant racism, and the effects of policies put in place in the 20th century such as Jim Crow Laws, gentrification and redlining are still prevalent today. Racism isn’t just societal, but it’s the system that consistently benefits white people over everyone else. This didn’t just go away once we got a Democratic president; there needs to be real, systemic change to fix this crisis.

This also applies to so many other problems that America needs to address: how to heal from the pandemic that still kills thousands of people daily, our flawed immigration system and so much more. As the citizens who elect the people in power, it’s our responsibility to not be complacent but hold the Biden administration accountable. Idolizing politicians is never a good thing — regardless of party, they will mess up and we have to acknowledge that. We can’t become stagnant just because we were happy with the election results; the country keeps going and people are still suffering.

As Black History Month comes to a close, be mindful of how you’re viewing the new administration. Don’t allow yourself to fall out of politics just because Trump’s gone; the same things you took the streets for this summer are still there, and we should never stop fighting for justice.