Manual loses in the second round of the L.I.T 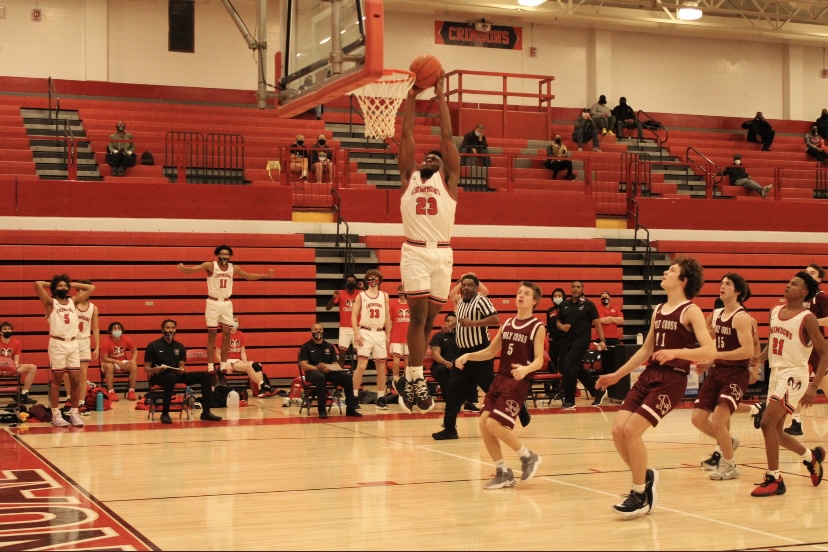 Jawuan Northington in motion for a two-handed dunk after a steal against Holy Cross in the first round of the L.I.T. Photo by Meredith Snyder

Last night, Manual (5-6) lost against Fern Creek (8-4) in the second round of the Louisville Invitational Tournament (L.I.T) with a score of 59-67.
First half:
The first few possessions of either team were scoreless and to end the drought, Manual’s Brendan Shene (#32, 12) scored the first four points of the game.

The first half of play was very physical as both teams were nearing the foul bonus, including Koji Anderson sinking two free throws giving Manual a 12-9 lead midway through the first quarter.

The end of the first quarter had a shift as Fern Creek’s CeArius Warren ended with a two-handed dunk making the score 14-13 Manual leading.

To end the first half Manual leads Fern Creek 28-27.

Second half:
To start the third quarter, Fern Creek went on a 6-2 run making the score 33-30 with the Tigers in the lead. Though Manual tries to keep the game close with Damone King (#21, 9) scoring a floater to tie the score 34-34.

Fern Creek had no sign of letting up even when Manual tied 34-34 as the third quarter finished with a 43-35 score and Manual trailing.

Hustle plays from Brendan Shene (#32, 12) and free throws from Koji Anderson (#2, 11) in the fourth quarter kept the game close but overall, Fern Creek kept the lead for the remainder of the game following their 6-2 run early in the second half.

The Crimsons will play a consolation game on Thursday in the L.I.T as further details are TBA.