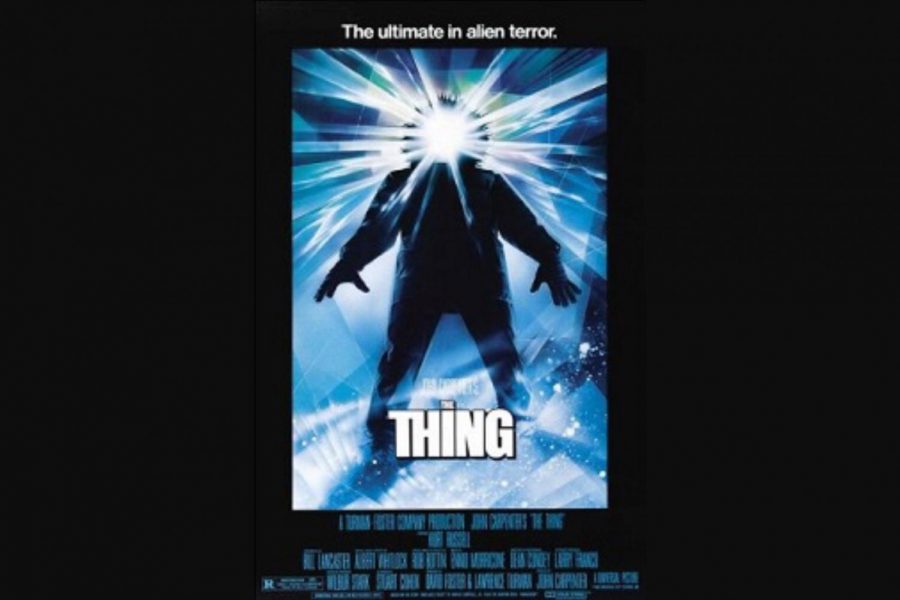 A helicopter streaks its way across the sky, soaring above an endless expanse of pristine Antarctic snow. A man peers from the opening in the side with binoculars, and then turns to the pilot, yelling something in a foreign language. The camera shifts, and we see a lone dog sprinting through the wastes. It turns to look behind it, and then continues running. The man in the bay of the helicopter brings out a rifle and begins firing repeatedly at the lone dog. He fires to no effect, and then he produces a grenade and attempts to drop it on top of the fleeing animal. We can now see that the dog is headed towards an isolated Antarctic research base. We get a quick look at the base’s crew, and then they step outside as the helicopter draws near. The dog runs up to the men and jumps up on one. The chopper lands and the pilot and man from the bay window step out. One drops a live grenade, killing himself and blowing up the chopper, and the second, holding the rifle, begins to shout, but nobody can understand him. He fires, hitting one man in the leg, and then chases after the dog, until one of the base crew shoots him dead.

This is the opening scene of John Carpenter’s 1984 movie, “The Thing.” The movie was not well received on release but has been making a comeback in recent years. It tells the tale of a group of twelve men at a United States research base in Antarctica, minding their own business until a Norweigan helicopter comes in firing wildly at a dog, and hits one of their own. The men then begin to unravel what is going on and discover that there is a reason the Norwegians went mad. Upon inspecting the Norweigan outpost, the crew finds an outpost half-burned to the ground. Parts are still burning, there are holes in the walls, an ax in a pillar, and a dead man at the radio, who appears to have killed himself. Most unnerving is a large hollowed-out block of ice, and a charred corpse drenched in kerosene, apparently human except for the second face melting into the side of the first.

“The Thing” is an amazing movie. It was an inspiration for the hit game Among Us, and just like that game, it shows how easily people can turn on one another when trust is absent. The crew of the outpost discovers that something is trying to infect and take over all the life it can get its hands on, and tensions ramp up as the men realize that any one of them could have already fallen to the infection.

The movie does a wonderful job of setting up an atmosphere of isolation. The crew is alone, with a malfunctioning radio and a blizzard rolling in, thousands of miles from civilization. The outside is frozen and deadly, bleak white stretching to the edge of the horizon. There is no escape, and nothing to distract from the fact that the crew is living on borrowed time.

As the team learns more about the monster, the situation begins to deteriorate. First, one man goes crazy. Then there’s sabotage, and nobody can pin the culprit. The team begins to argue, accusations are thrown, and trust disintegrates as one by one, men are found dead or proven to be monsters. This crew could survive almost any other enemy- they’re equipped with firearms, numbers, flamethrowers, and explosives. But unfortunately, the first casualty in this movie is trust.

I highly recommend the movie. It’s a film like little else, a horror where the focus is as equally on the dynamic and clashes of the characters as the monster, and where one gets that rare glimpse at the violence and fear men often succumb to when they have everything to lose. The theme of isolation hits especially close to home in quarantine, and the main antagonist is truly like no other — few means of detection, few weaknesses and able to hide perfectly. So much so, that by the end, you might even wonder if you’re the thing.

The featured image is licensed under fair use for purposes of review/commentary and criticism.