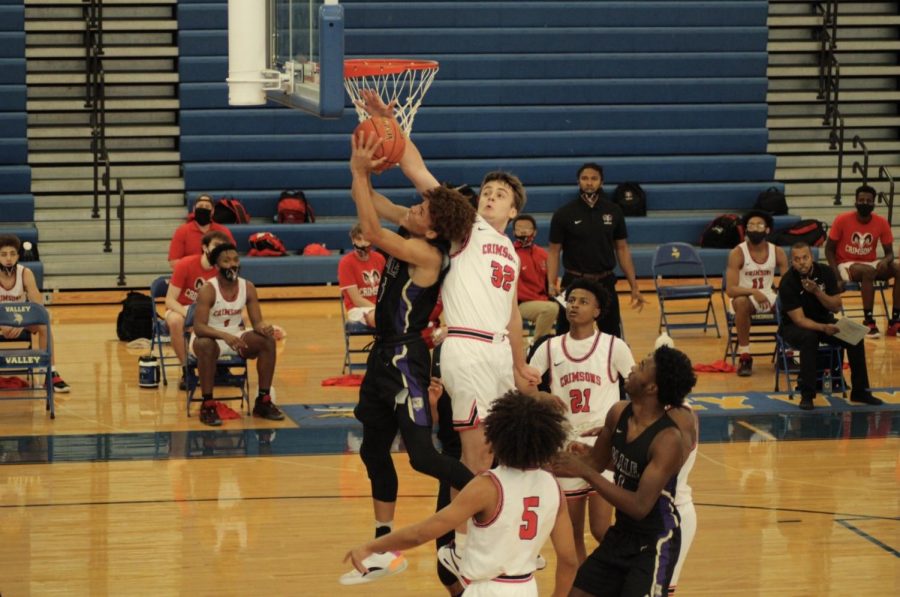 Last night, Manual (11-7) defeated Male (8-3) 68-62 in the Seventh Regional Tournament semifinals.
First half:
Early in the first quarter Brendan Shene (#32, 12) who averages 11.3 points and 9 rebounds was benched due to early foul trouble, only playing a total of eight minutes in the first half.

To begin the second quarter Koji Anderson (#2, 11) and Damone King (#21, 9) created key defensive plays which lead to Male turnovers. Throughout the first half, the Crimsons scored 11 points from turnovers.

Shene scores back-to-back baskets for the Crimsons late in the third quarter following an assist by Anderson and a steal with a score of 38-38.

Opening the fourth quarter a hook shot from Jawuan Northington (#23, 11) and two free throws from Damone King brought the Crimsons within one point (43-42).

Throughout the remainder of the fourth quarter, the score was back and forth between the two teams ending regulation tied 58-58.

Ja’Waun Northington’s basket ties it at 58. Male misses just before the buzzer. Headed to overtime, tied at 58.

Overtime:
The Crimsons went on a 10-4 run against Male in overtime including a steal by Shene finishing with a layup and Parker Smith (#5, 12) scoring four points within 13 seconds giving Manual the lead of 67-62.

With a final score of 68-62, Manual wins their first semifinals game since 2015 and will play the winner of Ballard-Trinity in the Seventh Regional Championship Saturday at 3.