Is Lee Street named for THAT Lee? 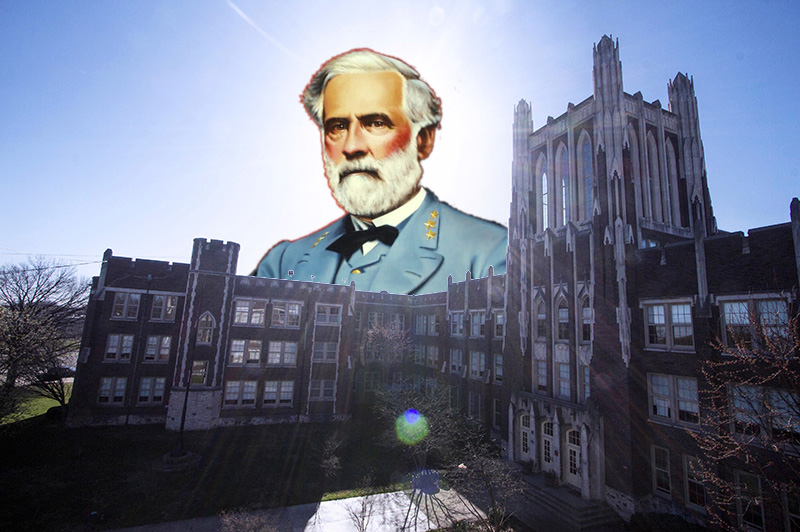 I was filling out scholarship applications that required me to type the school’s address over and over again: 120 W. Lee Street.

“I hope they don’t think it’s named after Robert E. Lee,” I thought. “We’re not like that in Louisville… Wait, or are we?” It was 156 years ago today that Lee surrendered at Appomattox, but there are still memorials to him and the Confederacy across the South and beyond.

Surely a quick search would put all unease to rest. Unfortunately, the first source I found was from a site about Old Louisville, and it said the street was named for General Lee. My fingers were already clacking on my keyboard, writing a scathing editorial about why the name needed to change, but I wanted to find a more authoritative source confirming the origins of the name.

I found a map of “Louisville and its defenses” from 1865. Forts dotted the edge of town protecting the second largest city in the South from Lee’s side of the war, but Lee Street did not yet exist. It must have been named after the Civil War.

With my trusty library card, I searched through digitized versions of the Courier-Journal for articles about the street’s name. I learned of social occasions like Miss Hannah Johnston’s lovely tea party at her house on Lee Street in 1909. I read about families that moved to and away from Lee Street. But I did not find out anything useful about the origins of Lee Street’s name.

But the plot thickens! I found a reference in the Courier-Journal to Lee Street from 1868. That was decades before the United Daughters of the Confederacy and Lost Cause myth started the push to honor the Confederacy with monuments, and it was even two years before Lee died. Lee Street must have been named between 1865 and 1868.

The map from 1865 lists a man named George Lee as a rural property owner about a mile southwest of where Manual is now. His estate then would have made him a wealthy man and naming streets after local landowners was a common practice.

These pieces of evidence made me skeptical of the claim that it was named after Robert E. Lee, but I had no concrete proof.

I emailed local historian Tom Owen, but he couldn’t come to a definitive conclusion. “It would be news to me if the street were named for Robert E. Lee, but there are plenty of surprises out there,” Owen wrote in an email with RedEye.

Then I got my hands on another attempt to answer the exact question in David Williams’s book “Secrets of Old Louisville,” but those who named the street were tight-lipped with this secret.

“Is Lee Street named for Robert E. Lee? Local historians debate the answer,” the book reads. “It probably was. The first mention of it is an 1876 article in the Courier-Journal.”

But pieces I came across do suggest that local politicians were fond of General Lee in the immediately postbellum era. The Courier-Journal reported five days after he died on a “splendid popular tribute” to “the dead hero”, with speeches from Mayor John Baxter and other prominent citizens and politicians. Flags were flown at half-mast, businesses asked to close during the funeral and the Board of Aldermen (the precursor to the Metro Council) adjourned when they learned that Lee had died.

Louisville was under Union control for the entirety of the Civil War, but sentiments about the war were always divided. After the Emancipation Proclamation, opinion turned against the Union in the large slave-trading city (even though it didn’t outlaw slavery in Kentucky). Louisville’s slave trade had contributed to its growing prosperity, and a massive slave market on the corner of 2nd and Main thrived even as U.S. Grant stayed at the Galt House.

Former Confederates took control of much of city government after the war, leading some to quip that Louisville joined the Confederacy after the war. Confederates largely saw Lee as a hero and blamed the Union victory on Jefferson Davis. It is quite conceivable that they would name a street for their erstwhile general.

George Lee, listed as a property owner near the then-rural area where the street would be built, was a gardener according to the 1870 census, though later censuses listed the family as farmers. While George was born in Pennsylvania, other adult Lees who lived in the household were born in Germany. He had 6 children with his wife Anna, and two Black servants lived in the household in the 1870 census.

Lee Street was not built through George Lee’s property, though, as seen in the map below. Learning of Louisville’s strongly pro-Confederate politicians made me think it likely they would name a street for Lee.

Still, there was no conclusive evidence. At Williams’ suggestion, I called the City of Louisville Archives. Looking at the photos on the archives’ site, I had a vision that I would have to sift through records in a room like that from Raiders of the Lost Ark, but David Morgan kindly checked the indexes to the minutes of the Board of Aldermen from the period in which the street must have been named. Unfortunately, he found nothing.

I paged through the Encyclopedia of Louisville. It has plenty of fascinating tales, but no mention of the street name, nor of any prominent Lees from the era the street was named in.

I contacted the Filson Historical Society, where Jennie Cole checked books and city directories, but she too found nothing to answer the question.

So I didn’t find a definitive answer. Maybe there is a record out there that could indicate for whom it was named, or maybe it is a mystery lost to time. I would guess that it was named for Robert E. Lee.

I am tempted to say that the street should be renamed just in case it is for Robert E. The traitor chose to lead the side fighting to preserve slavery. That was his main thing. Other important things he did include putting down John Brown’s slave rebellion and testifying to Congress that Black people shouldn’t be able to vote. Our school is built on a site of a widows’ and orphans’ home that housed many whose husbands and fathers were killed by Lee’s army.

If it was actually named for a local mid-19th century landowner, he wouldn’t shed any tears about it. Being a landowner isn’t some valiant deed that must be honored in perpetuity anyways, and we’ve got plenty of local heroes from more modern times. Hey, maybe we can quite literally sell Lee Street down the river by giving the street signs to Brandenburg.

Then again, renaming streets can cause confusion and would take time and money. It could just be a waste if we don’t actually know it was named for General Lee. If it ain’t broke, don’t fix it. Perhaps it was not actually named for Robert E. Lee and the Lee it was named for was a great individual.

Maybe there is an avenue that I didn’t explore. Or maybe we will never be certain for whom Lee Street was named. The question, then, is not whom Lee Street is named for, but this: if no one knows for whom a street was first named, is it still named for anyone at all?