Is in-person school what students expected? 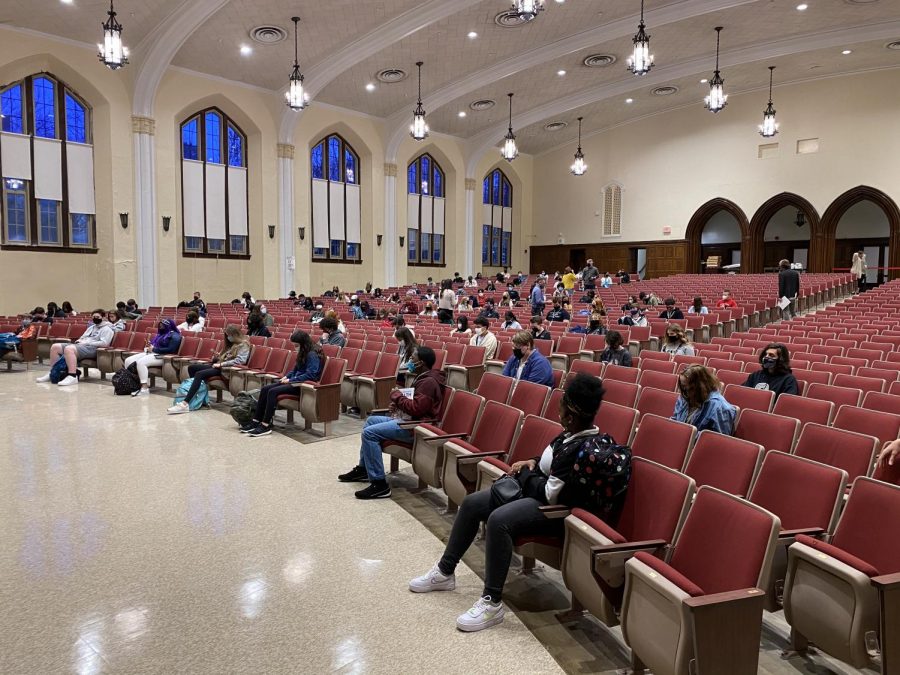 Students waiting in the auditorium before their first block class on the first day of school.

When in-person school was announced as a possibility, many people were confused as to how it would work. Even after a plan was announced, people still had questions. Now that students have been in-person for a few weeks, has the experience lived up to what parents and students imagined?

A few parents, like Jane Walsh, mother of Ike Harrell (12, YPAS) were concerned about sanitization and the safety of their students. “I expected that there would be a plan that included decreased density, masks and cleaning,” Walsh said. But after a few weeks of Ike being in-person, Walsh learned that “In-person school for the final weeks of this school year is pretty much as I expected.”

Some students were curious about how many people would be in the building, and how classes would work for teachers that decided to stay virtual. “I thought it would be a lot more crowded than it is. But other than the amount of people, I thought it would be pretty similar to how it is,” Juliet Cabral (12, YPAS) said. “I have one teacher who is virtual, and no one bothered to tell us how that would work until my first class with her in person. I wasn’t sure if we would just have a sub or what. But now we have the teacher on google meets, a second teacher with us in person and then all of the students in person together.”

Some students, like Maddie Rose (10, YPAS) were worried about the social aspect of returning to school. “I thought it would be strict guidelines in the hallways, classrooms, and lunch with seating charts and stuff so I  wouldn’t be able to see or talk to my friends,” Rose said. “It’s way better than I imagined because I get to talk to so many people who I don’t have a class with but see at lunch and in the hallways. Talking to teachers in-person has also been nice because I was scared to be in a classroom with so few students, but it can actually be really fun.”

While some students even describe the structure of in-person as better than they thought, some feel the opposite. This is the case for Lorian Mwinja (10, HSU). “I thought it would be way more like regular school just with less people. I expected to eat lunch with my friends, go to the cafeteria like normal and be dismissed normally,” Mwinja said. “There’s so many major differences. The one that hits me most is the fact that it doesn’t even feel like we are in school because the atmosphere is so gloomy since there’s no club activities, no after school help. And most of us don’t even get to see our friends. I know it’s for a reason, but it really sucks.”

Although returning to in-person school wasn’t exactly what students and parents imagined, students are still enjoying their time in the building. And with only a few weeks left in the year, most are just happy to have some version of normal in their life.