Has in-person school improved the mental health of students? 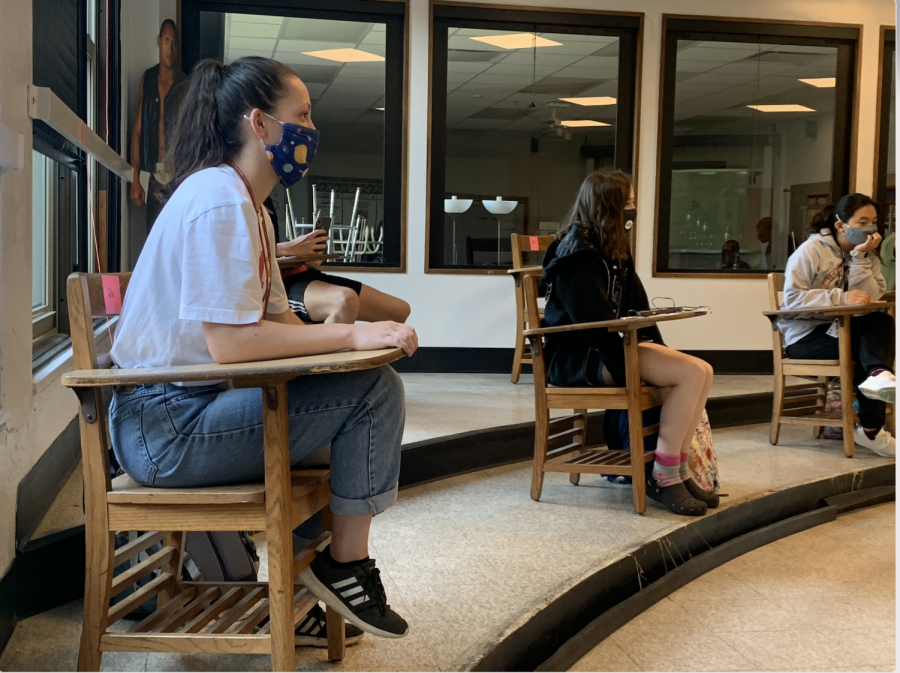 “Having a designated learning environment outside of my bedroom and free from distractions has improved my comprehension and engagement,” Keeley James (11, MST) said. “Additionally, the ability to have discussions with classmates has further enhanced my learning and social wellness.”

Being in the building has also been a beneficial change for Luc Fabing (11, HSU). “In-person school has diversified my workspaces, which has been really good for me.”

For freshmen who are new to Manual, being in the building as well as seeing classmates has been a positive change in their day-to-day. “There’s more of a routine now and I feel like I’m actually learning stuff compared to before,” Aaron Joseph (9, HSU) said.

As a freshman, Joseph has spent the majority of his first year in high school not knowing the faces of any of his classmates. “I guess it’s better than before since making friends was impossible virtually,” he said.

This also the case for fellow freshman Brendan Miller (YPAS). “I’m a very social person and love being in school with people to talk to,” he said. “When I was at home it was very annoying to get online and I was just feeling down.”

Beginning high school virtually presented many problems for Miller, which took a huge toll on his mental well-being.

“I started worrying about not having friends and just felt bad about myself and had no motivation to do my work or go to the meetings,” he said. “When I got into school I was so excited to see people and have people to interact with.”

Being in-person has helped Miller to truly start to enjoy the high school experience. “I’ve been happier and felt better about myself day-by-day,” he said. “I’ve been doing better in school because I have the motivation to do the work and try hard on it.”

For some students, simply having in-person conversations was all they needed to get out of their quarantine slump. “The social aspect of being able to interact with classmates and teachers has given some sense of normalcy and has made school something to look forward to,” Sonia Nagpal (11, HSU) said. “It’s definitely made me happier being able to talk to my friends in person.”

The energy of being around other people has greatly improved the mental state of Zoë Paige (11, J&C) as well. “Being back has brought back my motivation,” she said. “Being face-to-face with teachers gives their work that they assign more of a personal touch.”

Although being back has helped improve the routine and mental state of most students, many are still struggling to adapt to the norms of being in-person. “It’s really hard to find the motivation on off days to do homework and I’ve been so stressed with any tests I’ve had just because I haven’t taken a real test in over a year,” Kayla Stidham (10, MST) said. “Also AP exams are coming up and it just feels like so little time to get a lot done.”

Although she is stressed with school, Stidham is still grateful for the social aspect of learning in-person. Although, this social aspect is the root problem of other students’ issues with in-person school.

“Going from not being social really at all to being catapulted into having to be around people for seven hours has been overwhelming,” Magnolia Sudduth (11, YPAS) said. “Going back to school is pushing my social limits almost to their extent.”

For Sudduth, social battery issues have caused in-person school to be a rough transition, but she still appreciates the familiarity brought by being in a classroom. “If you’re looking at it in the realm of depression then it’s been a positive change and seeing people has brought my mood up,” she said. “But by the end of the day I am so exhausted from having to be ‘on’ all the time.”

Students like Halle Shoaf (10, HSU) believe that the schedule is the main problem with in-person learning. “We’re asking a lot of teachers,” she said. “But also, one of my teachers commented that we had five days to do work, however two of those days are weekends and the other three are this stuck-in-limbo period where you’re constantly checking for assignments.”

However, Shoaf believes this comes down to a simple solution. “I think the biggest issue is communication,” she said. “Teachers are so stressed trying to take care of their virtual students and stay on top of grades that they don’t coordinate due dates with other faculty.”

Although there are many complications in this new way of learning, students have expressed their gratitude for returning to the building. “While in NTI, I always felt like there was a weight on my shoulders in terms of work and class, while after returning to school I feel like that weight is completely gone,” Aiden Clark (11, MST) said. “I think teachers are also doing everything they can to help their students right now, and I believe it’s helping.”

Now that students are adjusting to being back in the building, many hope that their mental well-being continues to improve from here, and that their grades can recover from a stressful year of NTI. Overall, many Manual students are just grateful to feel like students again.