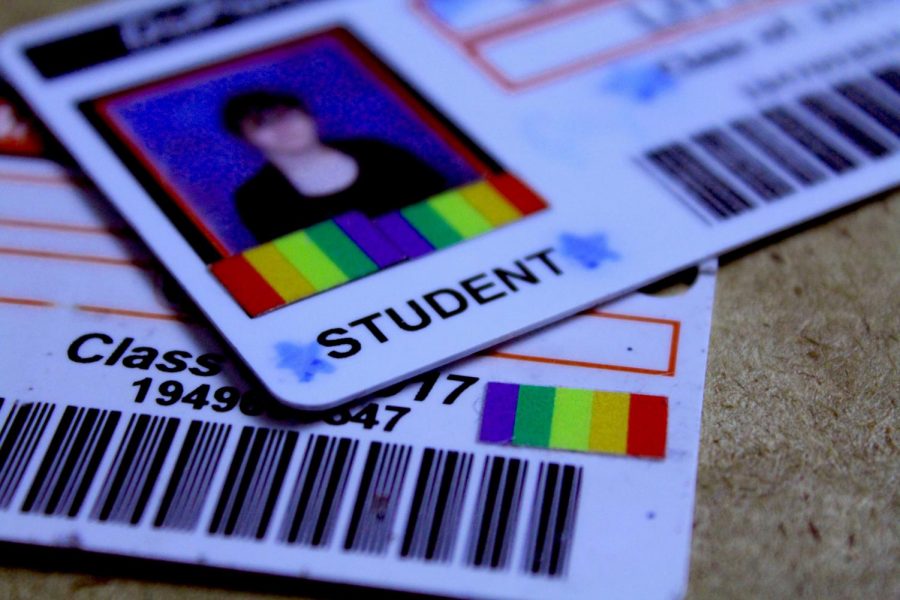 A Pride flag sticker covers a Manual students ID as part of an 2016 initiative by Manual's GSTA. The initiative, whose goal was to let students and teachers show support for LGBTQ students, was ultimately shot down. Photo by Kate Hatter.

This year, JCPS has put a lot of time and energy into students’ mental health. With the COVID-19 pandemic taking a toll on students and teachers alike, schools have enacted wellness days and advertised their counselors hard. However, now that students are back in person, and as the administration prepares for the next school year, JCPS schools need to prepare for the mental health issues that come with in-person schooling, most notably, bullying.

JCPS has taken steps to address both bullying and mental health in the past, putting out yearly presentations for teachers to read off to their students. However, these presentations often fail to address the root causes of bullying: the stigma and biases against BIPOC, LGBTQ+, disabled, and other marginalized students. When these students face bullying, harassment, and discrimination in school, it creates an unsafe environment that limits their ability to succeed and learn. As this is the beginning of Pride Month, this will focus on how LGBTQ+ students are affected by these issues.

Students who are bullied experience a variety of mental health issues including depression, anxiety, suicide ideation, and increased suicide attempts, and these issues are especially prevalent in LGBTQ+ students, being more than twice as likely to have attempted suicide than other students.

Students who experience bias-based bullying report higher rates of risky behaviors such as substance abuse and drunk driving. They also struggle in school, reporting lower grades and attendance and being three times likelier to say they will not complete high school.

It’s clear LGBTQ+ students are struggling in schools, so what should JCPS do about it? JCPS needs to take a strong stance in fighting the stigma and bias against LGBTQ+ students. There are three key policies JCPS should implement going forward in order to support and protect LGBTQ+ students.

The first would be to conduct comprehensive, county-wide surveys of their students and teachers on their awareness and knowledge of LGBTQ+ students, as well as their attitudes. They should also survey their populations on the frequency of bullying and harassment overall—while including specific questions about harassment based on sexual orientation, gender identity, race, etc. Full, top-to-bottom surveys of the student and staff populations would provide JCPS valuable information on their familiarity and attitudes regarding LGBTQ+ student issues and terminology while giving students a voice to bring focus to the issues they feel are most prevalent. They would also create a baseline measure of the pervasiveness of LGBTQ+ discrimination and bias-based bullying throughout its schools, allowing the board to recognize problem areas and compare against future surveys.

After getting a fuller understanding on bullying in JCPS schools, teachers should be given training on the issues affecting LGBTQ+ students, misconceptions and offensive or outdated ideas about the community, and the correct terminology when speaking to or about LGBTQ+ students. This is perhaps the most important step, as it would make clear to all staff, students, and parents the position JCPS will take in regards to LGBTQ+ rights in their schools. Similar training, structured in a way that is appropriate and understandable to the age group it is presented to, should be given to JCPS students, and specific LGBTQ+ issues—as well as other marginalized groups—should be addressed in the annual presentations on mental health and suicide awareness.

Finally, JCPS must expand the availability of resources on its website for LGBTQ+ youth and their families. A search of the phrase “LGBT” on JCPS’s official website brings up three results, only one of which is a resource aimed at supporting and educating LGBTQ+ youth and/or their families. This brochure is specifically aimed at parents, and in fact, is a good example of something JCPS has done very well. The brochure includes a brief glossary of relevant terms, multiple resources for further research, and a tone that is inclusive and educational in a clear concise manner, without slipping into a tone that is too formal, patronizing, or otherwise out of touch. Creating more resources like this, making them more readily accessible, and pushing them towards students, parents and faculty, can help supplement the direct education previously mentioned, and support students who may not yet feel comfortable speaking to a counselor or other adult.

On their website, JCPS has a list of ten Core Values in their mission to prepare and educate their students for the future. There are three values that are especially important in this discussion on LGBTQ+ students in schools: equity, respect, and stewardship. Equity ensures that “All students receive an education that gives them what they need to thrive through differentiated supports focused on removing social factors as a predictor of success.” When stigma against a group of students continues to lead to that group doing worse academically and socially, this becomes a barrier to their future success. Differentiated support involves focused anti-bullying campaigns when specific groups are being targeted due to classmate and teacher biases. Respect requires that “All students, staff, and families are treated with dignity and respect as members of a safe and welcoming learning community.” When studies indicate that LGBTQ+ students are bullied at a heightened rate than non-LGBTQ students, and that bullying is linked to higher rates of mental and physical health issues, schools can no longer be considered a safe environment for many students. JCPS must ensure that all students feel safe in their schools. Finally, stewardship means that “Adults model integrity, respect, and responsibility through mindful stewardship of talents, resources, and time.” JCPS should ensure that teachers have the knowledge to respect and support their LGBTQ+ students, and that they are provided a variety of resources to do so. Teachers and other faculty have a right to personal or religious beliefs, but above that, they have a responsibility to their students. No student should feel unsafe due to the action, or inaction, of an adult in JCPS’s schools.

JCPS has a responsibility to support and educate all of its students, and ensuring a welcoming and safe school environment is essential to that goal. In order to support LGBTQ+ students—and students of other marginalized groups—JCPS must comprehensively examine the prevalence and severity of bullying and harassment of these students. Then, by creating an action plan involving training, education and supplemental resources (and following through with it), JCPS can truly tackle issues of discrimination and harassment within its schools.