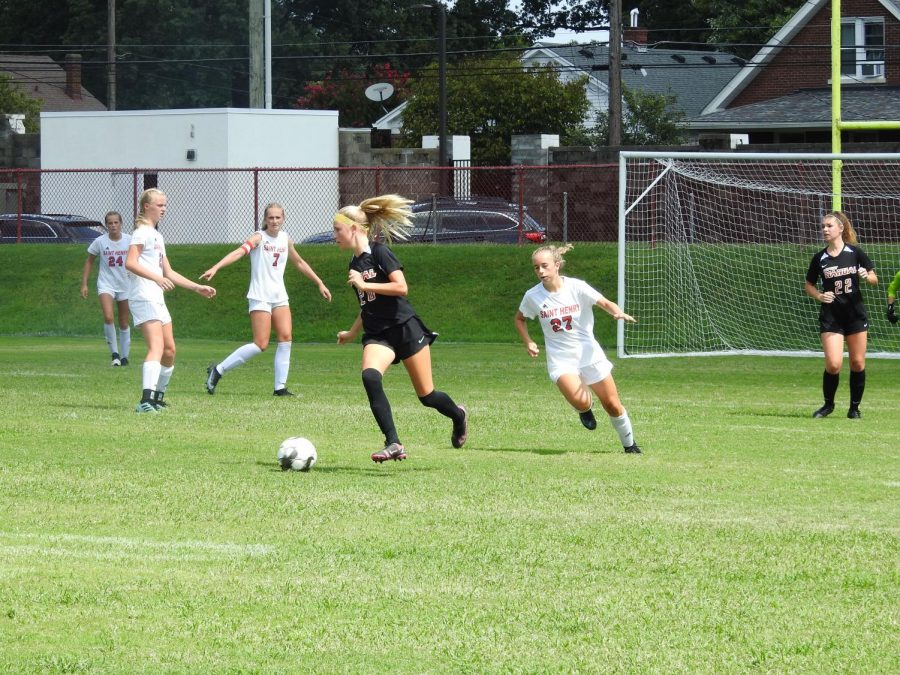 Jane Mundell (9, #20) a forward for the Lady Crimsons takes the ball from the Crusaders as she begins heading down the field. Photo taken by Yaara Aleissa.

The game started with a strong first touch by Kayla Cord (#18,11) as she passed it back and began the first half of the match.

Manual and St. Henry played vigorously as they fought for the first lead in the game which was taken by the Crimson’s Mia Bajic (#36, 9) after a corner kick by St. Henry, which the goalie was not able to catch, leaving an opening for Bajic who kicked the ball swiftly and hit it straight into the back of the net.

A water break was given to all players every 20 minutes in order to ensure they remain hydrated against the warm weather.

As they returned, the first strike at the goal was taken by St. Henry’s Reganne McMain (#33, 11), tying the score between the Crusaders and Lady Crimsons.

Not long after, Cord returned, pressing down the field and scoring the second point, putting Manual in the winning lead.

Following Cord’s goal, her entire team stood up cheering for her as she ran back down the field ready to continue.

Soon after, St. Henry’s goalie box was cornered and Jane Mundell (#20, 9) received the ball from one of her teammates, and made the third goal for the Lady Crimsons and the last goal for the first half.

Manual’s defense pushed hard during the second half, Francis Curtis (#27, 12) sent the ball back, crossing it down the field away from the Manual side and into St. Henry’s side of the field.

However, the Crusaders came in forceful blocking all attempts of the ball coming into their goal by the persistent efforts of their goalie Cassidy Cline (#1, 11).

Even with the constant push of the defense, St. Henry’s assistance in sending the ball allowed Mary Felix (#23, 12) to make the second goal for the Crusaders as they trailed only one point behind Manual.

At an attempt for the tying goal, St. Henry struck again but a powerful save by Manual goalie Kylie Seraphine (#1, 12) denied the attempt as she launched herself towards the ball catching before ever reaching the net.

Seraphine’s endurance is something she’s been working hard at in practice with the team to build up their stamina on the field.

“One thing we have been really working on during practice and in games is keeping our intensity up even after we score because sometimes that is when we can be most vulnerable,” Seraphine said.

The Lady Crimsons soon followed with another goal by Gianna Zamborini (#22,10) marking it as her second goal of the day.

In the final minute of the game both teams endured past the clock and continued pushing through until the buzz of the final half, with the Lady Crimsons taking the victory (5-3).

The two teams conjoined together for a group prayer led by St. Henry as both teams showed good sportsmanship to the results of a well fought game.

The Lady Crimsons behavior is also recognized by their coach who speaks in high regards about his players, “They are a really good group of girls, they treat each other as a family…they work for each other…they take care of each other,” Diego Romero said.

There is much to come from the Manual Girls’ soccer team as they continue to conquer the rest of this year despite the ongoing pandemic and the high heat index.

The Lady Crimsons Varsity team will return to play North Oldham on Monday, August 30 at 7 at Manual Stadium.