Jones and Calderón win August student athlete of the month 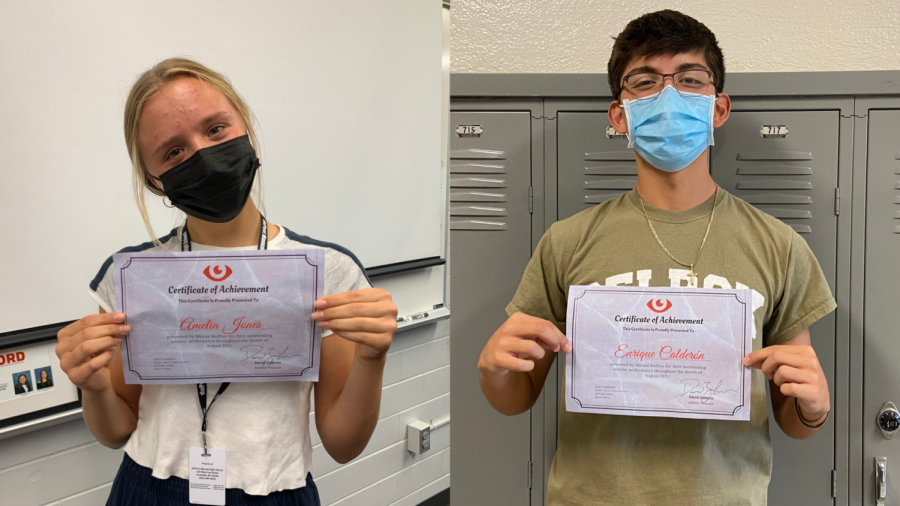 Amelia Jones (10, J&C) and Enrique Calderón (12, HSU) pose with their August athlete of the month certificates. Photos by Macy Waddle and Aliyah Lang.

RedEye’s August female student-athlete of the month was awarded to girls’ soccer player Amelia Jones (10, J&C). In the three games the Lady Crimsons have played, Jones has scored six goals, including a hat trick in the team’s 7-4 win over Ballard on Aug 1. In comparison, Jones only had 2 goals for the entirety of last years’ season.

Jones’ explained that her newfound confidence during her club season is what has helped her step up this year. “Last year I was so afraid to make a mistake or take risks in fear of disappointing my teammates,” she said. “Now I’m not afraid to take shots or make risky passes. And I think that confidence has allowed me to relax and have fun and to just play to my best ability.”

She also accredits her success to her teammates, specifically the upperclassmen on her team whom she got closer with after last season. “They listened to what I had to say and I’m in this role because of their support and their trust that I can help the team,” she said.

Her goals for the rest of the season are simple, “[I want] to continue to grow as a player and support my teammates. I know that sounds cheesy but I still have so much to learn about the game and my team,” she said.

Jones and the rest of the Lady Crimsons will take on South Oldham tomorrow at 7:30. The game has been moved to South Oldham due to in-climate weather.

RedEye’s August male student-athlete of the month is Enrique Calderón (12, HSU), who is the goalkeeper for the boys’ soccer team.

This year,  Calderón’s defense has led to a shutout win against Seneca and Male, in addition to defeating St. Xavier at St. Xavier  for the first time in school history.

In the past, Calderón received multiple high-level accolades including the 2021 Kentuckiana Boys’ Soccer Player of the Year and was named to the West First Team in 2020.

Despite his achievements Calderón hasn’t received any college athletic scholarships offers, though he plans on continuing to play soccer on the collegiate level.

“It’s kind of too late for college recruiting, but I plan on walking on to play soccer at whatever college I decide to attend,” he said.

Alongside being the goalkeeper for Manual, Calderón plays for the Louisville City FC 04 Academy team.

“If I can’t walk on to play for my college team, I may join a club team at the school and maybe even referee,” he said.

— Manual Athletics (@ManualAthletics) August 7, 2021
To keep up with Amelia and Enrique throughout the remainder of the season stay tuned for “This week in Manual athletics” for the weekly sports calendar.