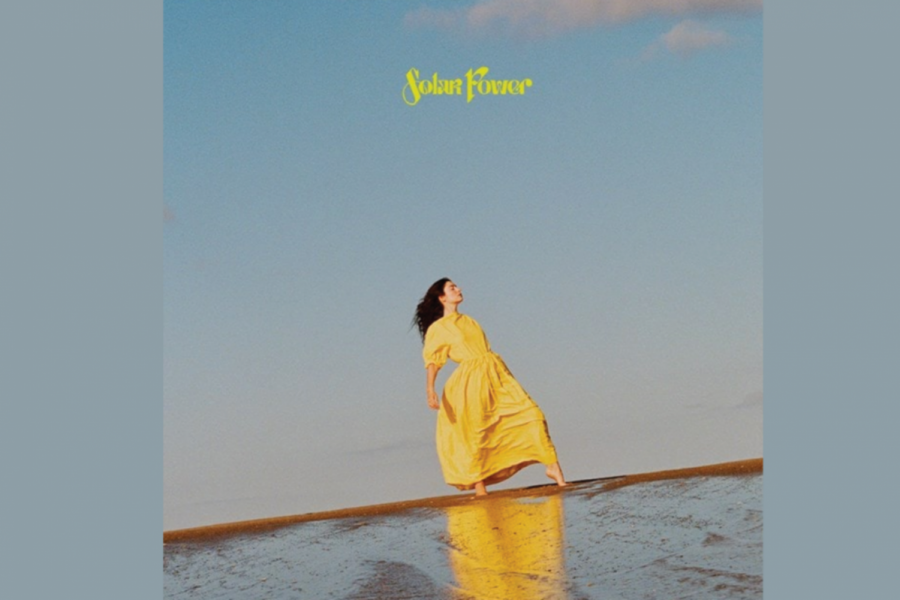 Lorde's third album "Solar Power" is full of sun and a more lighthearted feel than her previous work. Graphic by Brennan Eberwine

Ella Marija Lani Yelich-O’Connor, better known as Lorde, burst into the music scene in 2013 with her dark moody song “Royals”,  a near antithesis to the music at the time. It rejected all of the vain, excessive pop music of the time and landed her a number one spot on the Billboard Hot 100.

Lorde released her debut album “Pure Heroine” at only sixteen years old and quickly rose to critical acclaim for her introspective lyrics and electric production. She followed it up in 2017 with “Melodrama,” an album dealing with personal heartbreak after the end of her relationship. Five years later she’s back, this time with an album nothing like her last two.

“Solar Power” is not the Lorde that we’ve come to know. The brooding teen who’s a liability is gone. Instead, she’s frolicking outside among the waves and the sun. Can you reach her? No, you can’t. Everything on this album is a complete 180 degree turn from songs on “Pure Heroine” or “Melodrama.” The electronic beats of her past albums have melted away in favor of dreamy acoustics. It’s so stark that some don’t even recognize it as her. When I played her song “Mood Ring” in the car for my Mom it took her a minute to realize who it was.

The opener to the album “The Path” is almost the polar opposite of Melodrama’s opener “Green Light.” The electronic dance beats are not present, instead opting for a laid back guitar and Lorde’s subdued layered vocals ready to serenade you.  “Mood Ring” holds  breathy vocals that slyly poke fun at western wellness culture.

The humor and cheekiness Lorde puts into this album is personally my favorite part. On “Solar Power” , her sun-soaked title track that’s basically a tribute to the sun, beach and all things summer, Lorde says the hilarious line, “I’m kind of like a prettier Jesus.” On “Secrets from a Girl (Who’s Seen it All)” a song sung to her fifteen year old self about growing up and reassuring her past self that it’s all gonna be ok, Lorde sings, “Your emotional baggage can be picked up at Carousel Number 2, please be careful so that it doesn’t fall onto someone you love.”

Despite the goofier lyrics on “Solar Power” Lorde is still able to keep it balanced with incredibly heartfelt aspects.  In her song “Secrets from a Girl (Who’s Seen it All)” Lorde sings, “Everybody wants the best for you, but you gotta want it for yourself, my love” which is a beautiful and touching line that’s personal but also relatable. Lorde has moments on this album that are touching but not heart wrenching,  unlike songs on “Melodrama.” It keeps a nice light feel, never taking itself too seriously. After all, this is what she dubbed her “weed album.”

“Solar Power” has had a mixed reaction, with a Metacritic score of 69. This is far lower than the 91 she received for “Melodrama” and the truth is that it’s mainly because of the strange psychedelic folk direction that eludes fans and critics used to her idiosyncratic electronic beats. As “AllMusic” put it, “If you’re riding and vibing with Lorde, this bright shapelessness is superb mood music. If you’re not riding her wave, Solar Power can seem elusive, even cloying, as it circles and sways with a smile.”

So who’s to blame for the lack of a “Green Light” or “Ribs” on “Solar Power?” Is it super producer Jack Antonoff who’s absolutely unavoidable these days, poisoning Lorde with his acoustics? Is it the fans trying to get her to rush an album out? Is it one too many horoscope readings and a wardrobe full of yellow? I think it’s quite simple what has happened to Lorde: happiness.

Lorde’s discography up to Solar is full of despair, moodiness and heartbreak. Being a teenager is rough and going through your first heartbreak is even worse; but, Lorde isn’t a teenager anymore, she’s a twenty four year old woman who figured out how to escape the social media celebrity culture she has so much disdain for. She does what she wants, when she wants to do it. What she wanted to do was go outside for a while and make an album full of the sun and beach and for someone in the middle of a pandemic, that’s exactly what I needed: an album that says “c’mon let the bliss begin.”

In a lot of ways this album reminds me of another album by a songwriter who rose to prominence in their teens and took a long hiatus after their first two albums: Fiona Apple’s “Extraordinary Machine.” This is Apple’s jazziest, least miserable album in which she has lines like, “If you don’t have a date, celebrate, go out and sit on the lawn, and do nothing” and “Be kind to me, or treat me mean, I’ll make the most of it, I’m an extraordinary machine.” To date this is Apple’s least critically acclaimed album, but there’s still something refreshing about hearing someone who isn’t constantly in a pit of despair.

Of course, the album isn’t perfect (“Stoned at the Nail Salon” and “The Man with the Axe” are too subdued and don’t progress enough to hold me for their entire length) and there could stand to be a bit more diversity in production. Lorde is ultimately doing what she’s always done. She’s following the beat of her own drum. Lorde set out to create a chill album full of folksy summer escapism and very much succeeded.

The merits of “Solar Power” lie in its ability to just go with the flow. So why not let the psychedelic sounds wash over you and maybe groove a little with Lorde? Eat some onion rings and relax. It definitely can’t hurt. I give this album an overall score of 7.8/10.