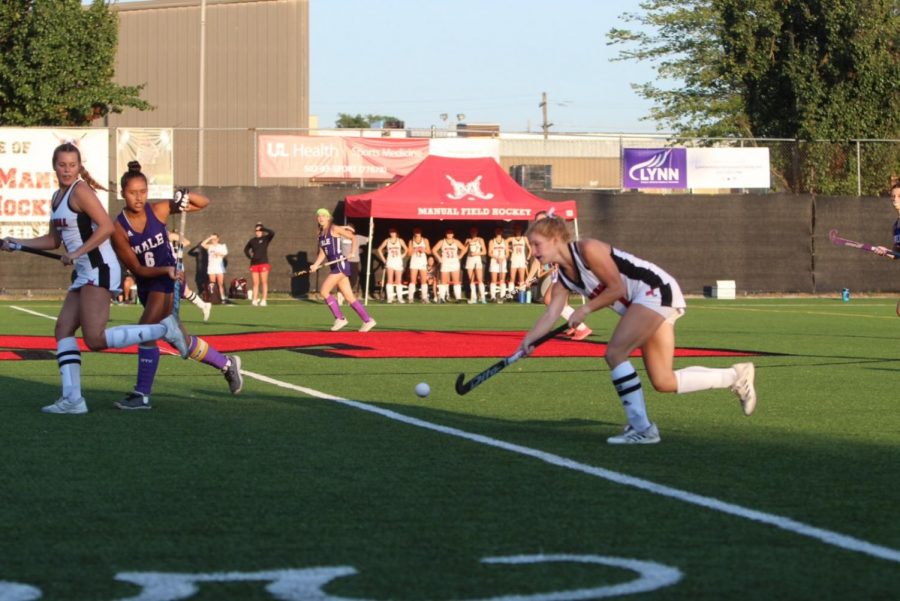 This piece was submitted by Kendall Geller (10, J&C).

On September 9, Thursday night, varsity field hockey defeated Male 8-0 in their home opener at Rachel Baker field. The game took place almost entirely above Manual’s 50 yard line, with defenders and midfielders responsible for turnovers whenever Male took it up the field. Amelia Frey (12, #22) scored her first hat-trick of the season during last night’s game.

Manual scored four goals in both the first and second half of the game.

In the first quarter, Dylan Breier (12, #27) dribbled into the circle and took a successful shot on cage within the first eight minutes of the game.

Three goals were scored in the second quarter. Mya Cummins (12, #12) was the second scorer of the game, followed by a goal from Sophie Young (10, #39). Young scored on a corner, with an assist from Breier and a second assist from Frey. The last goal of the quarter was on a stroke by Frey after a foul by Male’s goalie. Frey lifted the ball deceptively to the left side of the cage, past the goalie and into the net.

Anna Claire Straub (12, #3) was the first scorer of the fourth quarter, dribbling into the circle and hitting the ball into the cage. The goals scored in the fourth quarter occurred within two minutes of each other. Macy Carmony (11, #15) scored with three and a half minutes remaining on the clock, with an assist by Cummins. Frey scored the last goal of the night through a push into the corner of the cage with less than 90 seconds left in the game.

At the end of the game, Manual ran back to the goalie and celebrated the rest of the way off the field.

“We came out with high energy and phenomenal passing,” head coach Brittany Vencill said when asked about what contributed to her team’s success.

Individually, Frey’s success was celebrated throughout the team and the crowd—the largest one that varsity has seen all season.

“It was mental coming into the game. Visualizing and seeing [the ball] in the cage helped me execute,” Frey said.

Frey also made a reverse chip that went into the cage during the third quarter, but the referee called a foul and the goal did not count. Overall, Manual made eight of their 23 shots at goal.