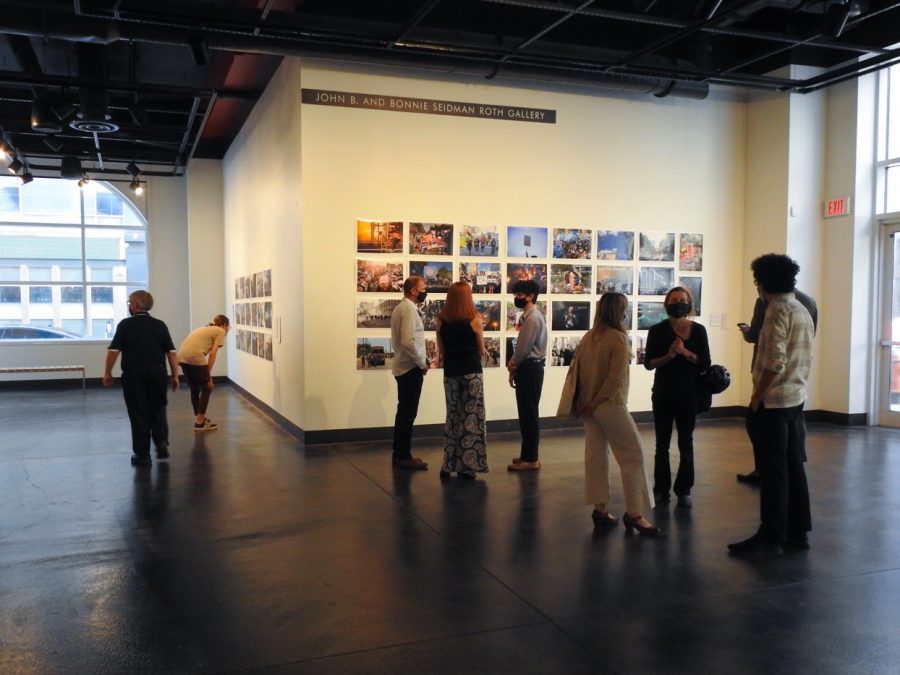 Guests at the Cressman Center for Visual Arts mingle and look at the photos in the gallery. Photo by Isaac Barnett.

This past Friday, September 17, the Cressman Center for Visual Arts hosted the opening reception for a photo show entitled From the West End to the West Bank: Oppression, Racism and Resistance. The focus of the show was to highlight the similarities between the everyday struggles with violence and oppression in the West Bank and in West Louisville.

“Once I moved to Louisville, five years ago, I started to get involved with the local Black Lives Matter movement and other social justice organizations. And as somebody who lived in both places, I could see the similarities of both the daily reality of the kind of separation here for African Americans and the white and in Israel, between Jewish and Palestinian communities,” said the event’s curator, Shachaf Polakow.

Sean McInnis, a Manual alumnus, had two photos in the gallery, one showing a large group of protestors running away from a cloud of tear gas and the other showing a group of three protesters on bikes before the violence broke out.

“My sister and I decided to participate in the demonstrations, I believe it was May 2020. I decided to bring my camera because it was a great opportunity to capture photos. It was intense because when they would shoot the tear gas, it would sound like a small explosion, so me and my sister were running ahead of the group. And I turned around to take the photos and I was kind of focusing just on the photos and trying to capture the moment,” McInnis said.

McInnis was chosen when an University of Louisville faculty member saw his photos through the National Scholastic Art and Writing contest and recommended him to Polakow.

“One of the photography faculty members at U of L had seen my work through the National through the Scholastic art and writing contest because she was one of the judges,” McInnis said.

Polakow was especially drawn to McInnis’s photos because of the way they showed both the violence and the peace that occurred in Louisville’s protests.

“He had the one with the bikes, which I found a very intimate, small moment in this chaos. It’s really important not just to show the intensity, because the struggle is also in between running away from the police. It’s in a moment where people get together and fight for a better place,” said Polakow.

This exhibit is one of many being held all around the city as part of the 2021 Louisville Photo Biennal. The exhibit will be showing at the Cressman Center on 100 East Main Street until October 8.