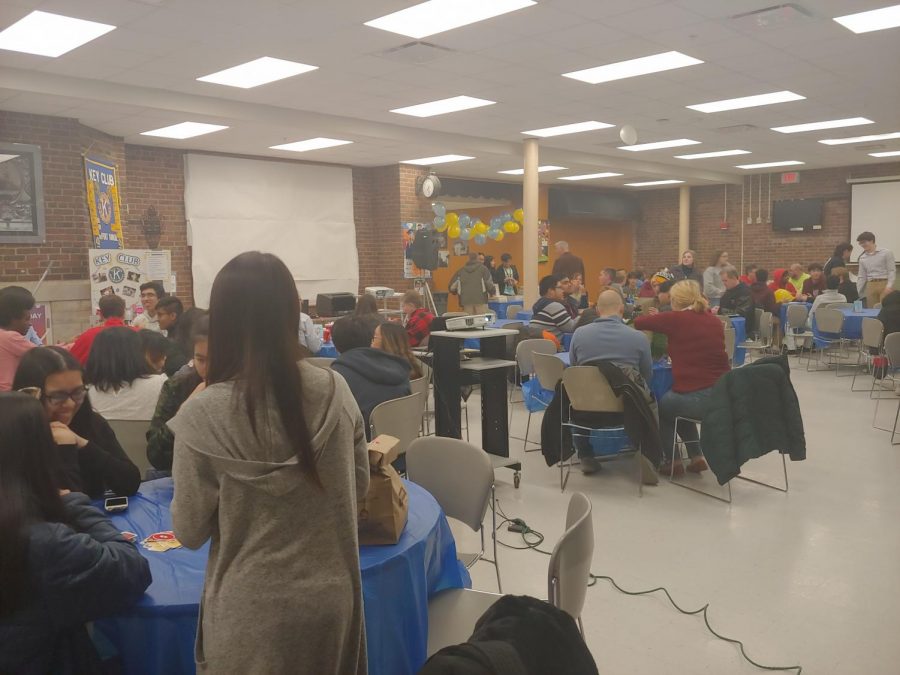 Key Club members get food and hang out with friends before the trivia games begin. Photo by Ofelia Mattingly

The discussion surrounding mental health is more prevalent than ever, bolstered by quarantine repercussions and reinforced by the current status of our social climate. Interpersonal relationships were tested by the quarantine and many students felt the ramifications full force, particularly high school students, who experienced a huge change in their social and emotional skills those four years.

We have a generation of children being raised with a temporary lack of social intimacy and a few years worth of missed out social interactions. Quarantine made it easier than ever to pull out from plans or default to social media for those relationship needs. Little social interactions throughout our day- talking with people at the coffee pot at work, chatting with someone in line at the grocery store or inviting someone over after school- became replaced by Amazon deliveries, at-home work and NTI.

The more altruistic we became, the more isolated we got.

“Consistent with previous studies, our review presents a range of negative psychological impacts of mass quarantine, such as low life satisfaction, emotional isolation and fear of infection,” a study from the Journal of Travel Medicine states. None of this is new information; if anything, it just solidifies what communities have been saying for months on end.

It tends to be in human nature to rally together in times of crisis, such as war. Suddenly people become patriotic and are willing to sacrifice for the overall welfare. What we’ve seen, in addition to this unification, is that people have been more open about their feelings and towards mental health discussions.

However, if a crisis is supposed to bring about unity, why do many students feel alone or uncomfortable getting back to more social situations?

“Mental health and quarantine did a lot to personal relationships. Strained them,” Anabelgica Rodriguez (11, J&C) wrote.

If their relationships have been strained, wouldn’t they want to find new ones or rebuild what once was?

“I definitely stopped talking to a lot of people and now i’m trying to rebuild those friendships,” Anna Schroll (12, J&C) wrote.

These students and many others all face similar struggles when it comes to bouncing back from the COVID-19 quarantine. Difficult times such as these are supposed to bring us together and in a sense they have, making avenues for mental health or socio-economic issues more available and less stigmatized. Despite that fact, some students are having difficulty re-adjusting to pre-COVID social norms and maintaining consistent, healthy relationships.

Intense nervousness, anxiety and stress regarding social situations and wanting to be alone most of the time help characterize what some students are feeling. It took a while to get here and will probably take a while to get back to “normal,”  whatever that may look like. Students have to understand that they are not alone in their awkwardness, fears or feelings that they’re missing something. It’s easier said than done, but the world doesn’t stop and we must have the courage and strength to stand up.

It’s when teens hit the ages of 15-17 that they begin, “having a deeper capacity for caring and sharing and for developing more intimate relationships,” according to the CDC. A good portion of students were in quarantine during this age range, meaning that they did miss out on a critical developmental time.

Fortunately, there are plenty of safe ways to interact with peers your age in-person. Manual has two more home football games, Red/White week is just around the corner and even though we must socially distance ourselves in class, there’s still time to talk with those around you. Start small, it can be with a compliment or cliche talking point. Ask a wacky question if you’re feeling bold.

The point is that if you’re struggling with becoming more social again, you take those first key steps and show yourself that you can do it. You can and will make healthy relationships with peers, teachers, even family members.