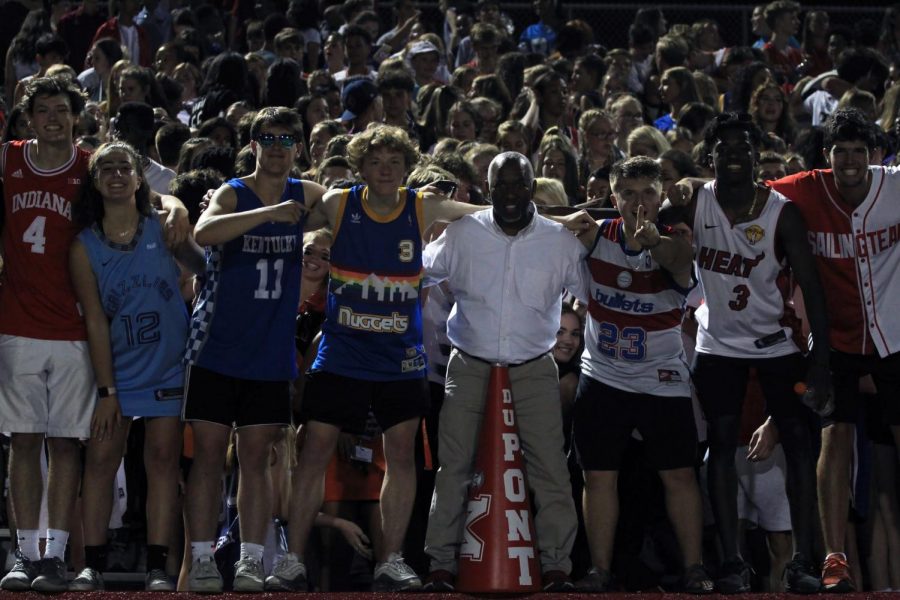 Mr. Farmer hypes up the student section at a recent football game. "I only have one word for you, and it is Ramtastic!" Farmer said. Photo by Destiny Graham.

Entering the week of Sept. 21, the Kentucky Associated Press released their rankings for 6A high school football teams. Manual football currently ranks fourth with a record of (4-1) prior to last night’s win.

Last night, the football team defeated Ballard, ranked third in the  6A state in a 47-14 shutout win. Following the Crimsons win, their record is now (5-1) and will likely become third in the state with Monday’s ranking.

Manual (5-1) certainly made a statement tonight in blowout fashion. Lot of momentum to take into next week’s battle against @StXTigersFB

“I feel like last night’s win gave us a great confidence boost. We proved that we’re one of the best teams in the state when we don’t beat ourselves,” JaWaun Northington (12, HSU) said.

To kick-off district play, the football team will play St. Xavier on Oct. 8 at Manual Stadium. The Tigers are ranked second in the 6A state and sit at a (4-1) record. Their one loss this year is against Male, who ranks first in the state.

Although the team has important games in the upcoming month they still look forward to the season one game at a time. “I only expect us to go out and practice hard every day and take each game week by week,” Northington said.

Despite the shortened football season last year, Manual lost against St. Xavier 10-6 in the playoffs.

PRP’s record is currently (3-2) and lost against Bowling Green and Lexington Catholic, ranked fifth in the 4A state.

Manual’s last district game of the regular season is against Butler on Oct. 22. Butler has declined the past two seasons with a current record of (1-5).

In 2019, Manual won the 25th district finals for the first time in over thirty years in the defeat of Butler. Additionally, last season, Manual football defeated Butler 55-0.

Manual’s final regular-season game is against Male at Manual Stadium. The two did not face off last year due to COVID-19 but the Old Rivalry will return on Oct. 29.

Male is currently ranked first in the state with an undefeated record. The last time Manual defeated Male was in 2013.

Overall, the team hopes to finish their season strong and continue to play as a team.

“I noticed how everyone came together and didn’t put foot of our opponent, the energy that we had (last night) is what we feed off of and I feel like we definitely will carry that on throughout the rest of the season,” Ramont Townsend (12, HSU) said.

Stay tuned for This week in Manual athletics and ManualREsports on Twitter for football updates.