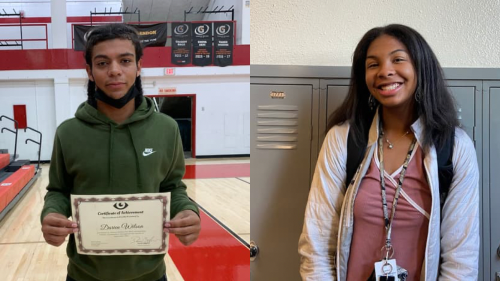 Photo of Darien Wilson (12, HSU) and Nya Bunton (11, HSU) after being selected as athlete of the month. Photo by Macy Waddle and Aliyah Lang

Nya Bunton
RedEye’s female Athlete of the Month for September is Nya Bunton (11, HSU). Bunton is a middle blocker and outside hitter for the volleyball team.

The volleyball team currently has a record of (16-8). So far this season, Bunton has scored 236 kills and averages 3.63 kills per set in 22 games. Additionally, Bunton has racked up 29 blocks and 94 digs.

Burton’s all-around performance has led to her being selected to the USA U18 2021 Volleyball Training Team and her commitment to the University of Texas.

Class of 2023 OH/MH Nya Bunton commits to Texas. Making her the second KIVA player of this class to commit to the Longhorns. #Congrats #KIVAPROUD pic.twitter.com/3VsYEiWkYo

“I committed to Texas because it was the best fit for me. I loved the coaching staff, the facilities, and I know I’ll be pushed to be an even better person and athlete there,” Bunton said.

Bunton is also looking forward to Texas’ move to the SEC in 2025 and being able to play games close to home.

The volleyball season is winding down with only seven regular-season games remaining, though Bunton still sees improvement for herself and her team.

“I think as a team we are starting to find our identity and standing up to adversity. We still have a good amount of work. I feel I’m getting better at smaller things in my career like having more intensity,” Bunton said.
Darien Wilson
RedEye’s male Athlete of September is Darien Wilson (12, HSU), the starting quarterback for the Crimson football team.

This season, Wilson has led the football team to a (5-1) record as the team is currently ranked sixth in the state of Kentucky.

“We have a great team this year, nobody matches our talents. When we go out on the field we’re playing against ourselves,” Wilson said.

So far this season, Wilson has thrown 531 yards, an average of 88.5 yards per game. In addition, he’s rushed an average of 72 yards each game, (432 yards in total) scoring four rushing touchdowns on the season.

Wilson earned Kentucky football offensive player of week two due to his performance against Floyd Central. In the game, he had 139 passing yards and 139 rushing yards with two touchdowns.

As the football team approaches the second half of their season, they will kick-off district play against St. Xavier this Friday at Manual Stadium. Following Friday’s game, the football team will have three more regular-season games.

Coming into the home stretch of the season the team is confident, “These next few weeks we have district games and those are the ones that count most. I have high hopes for the rest of the season,” Wilson said.

To stay updated with Bunton and Wilson throughout the remainder of their season, stay tune to ManualREsports for live game coverage.