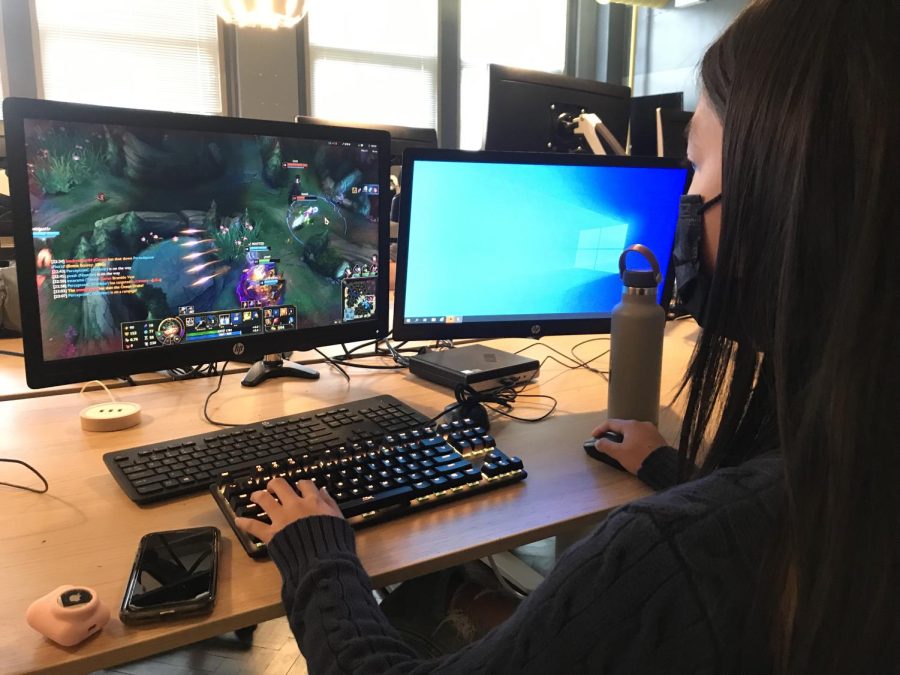 This piece was submitted by Cooper Walton (10, J&C).

One of the E-Sports teams, the Red Team, won their first League of Legends game of the season, defeating Pikeville High School by winning the two matches played from the Honeycomb Lab on October 5.

“The first game was not really close at all because our team comp was good and we all went off somewhat comfortable champion picks,” Pausha Bovornthamajak (11, VA) said.

The team sat together over rows of computers, their only contact with the other team being through the game’s chat feature.

The opening match began with the destruction of Pikeville’s first of three defensive turrets guarding their base in the top lane of the map, however, the team eventually broke through all three turrets in the middle lane to access the enemy team’s Nexus. Manual destroyed it, winning the match. Pikeville was only able to destroy one of Manual’s turrets, the first on the top lane before their Nexus was destroyed.

Bovornthamajak felt that the second game was more difficult due to the choices that Pikeville made during the pregame section, in which the team members select the characters that they play as in the match.

“The enemy team had banned the champs we played last game, forcing us to play champs that we hadn‘t played today or even in a while,” Bovornthamajak said.

The second match began after a brief intermission due to technical difficulties, with Manual destroying turrets in each lane, similarly breaking through the middle lane after a prolonged battle at the third turret. The team made quick work of the defending Nexus turrets, then striking the Nexus, winning the game. Pikeville was unable to destroy any of Manual’s turrets.

The teams played on Summoner’s Rift, the most popular game type in League of Legends. Five players make up each of the two teams. To win the game, a team must destroy their opponent’s Nexus, the heart of their base, which is closely defended by two turrets.

The two teams’ bases are connected by three pathways, or lanes, separated by jungle. Three defensive turrets line each path for both teams, followed by an inhibitor. Destroying all of these in a single path will grant access to the Nexus.

“One thing that I learned from last year’s teams was that the chemistry [within] the teams is the biggest thing,” Coach Mr. Jacob Jury (Math), said about his strategy.

The team cracked jokes and let each other know about their actions as they played.

In addition to the team’s chemistry, Jury also focuses on pushing the players out of their comfort zones during practices. “We’ll be trying out different champions that we’re not comfortable with and we’ll be looking for opportunities to stretch ourselves, really,” Jury said.

The team won all four sets of matches that they played during preseason games.