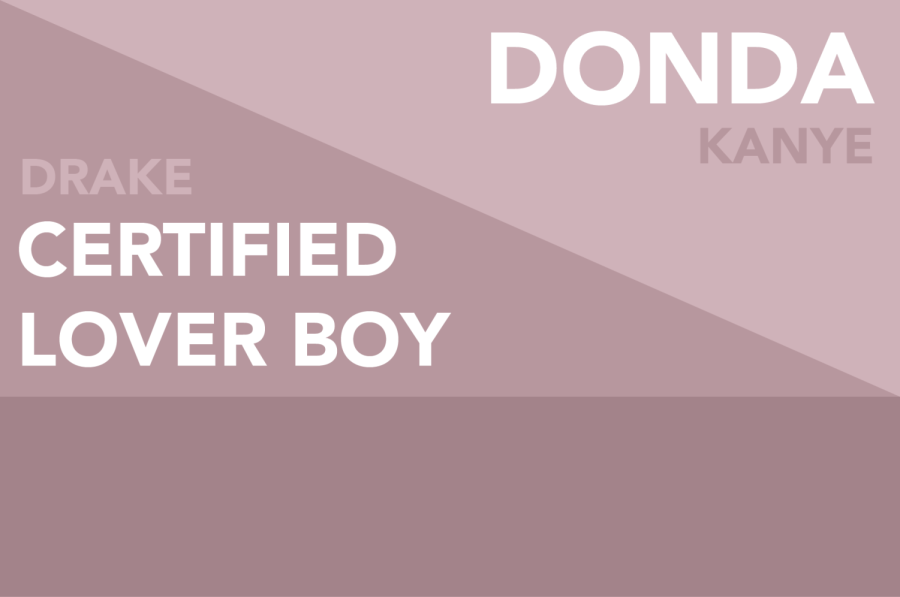 It’s been a little bit over a month since Kanye West released his 10th studio album “Donda”. Just five days later, rapper Drake released his sixth studio album “Certified Lover Boy”, which was a statement considering the feud between the two artists. Due to these close release dates, many compared the two and formed sides: Team Donda or Team CLB.

While the two had been competitors since 2009, the issues started heating up in 2018 after both rappers publicly dissed each other in not only their music, but also during interviews and on social media.

There has been some speculation that West delayed his album, originally said to be released August 5th, to compete with CLB. However, as far as streaming went, “Certified Lover Boy” surpassed “Donda” immensely in the days following their release. According to Rolling Stone and their analytics provider Alpha Data, in the first three days after CLB was released, it reached over 430 million streams, while “Donda” reached 423 million in the eight days after its release.

“Donda” was still successful in its own regard, with all 27 songs landing on the Top 100 chart in its first week. Manual students have formed their own opinions on which album they think is superior.

Many students in favor of “Donda” admired West’s unique choices. “ Donda was way more interesting, I’m not a huge rap fan but I always appreciate Kanye for being experimental and fresh. CLB was just so boring and there wasn’t anything particularly new or innovative in it,” Kyle Sanderfer (12, MST) said.

Drew Baker (10, J&C) agreed, commenting on the different styles of music West featured on the 27 track record. “Donda took risks, it chose to change the generic rap album and make it unique with features and gospel,” he said.

Iman Dashti (12, MST) also enjoyed some of the choices he made. “The fact that it’s 100 percent clean is very commendable. I respect how Kanye is able to make such a good album without feeling the need to use explicit language, extending the appeal of his art to even young children,” he said. The rapper’s second most recent album, “Jesus is King” was also free of explicit language, which is somewhat unusual for a rap album.

Some who preferred “Certified Lover Boy” were drawn to the album for one reason: Drake’s legacy.  I’ve been listening to him [Drake] the longest out of all the artists I listen to now. He’s not just a rapper he can change it up and do different types of music and give off different vibes,” Jakayla Thompson (11, HSU) said.

Others were drawn away from “Donda” from West’s reputation. “I tend to listen to Drake more than Kanye, I don’t really care for Kanye personally,” Ava Vibbert (11,YPAS) said. Sarah Kwasny (11, MST) also noted that she was not a huge fan of Kanye because of his past relations with her favorite artist, Taylor Swift, but still doesn’t discredit all the work he has done for “mental health de-stigmatization and black music.”

Drake has also been praised for the strength of features on CLB, including those from rapper 21 Savage, JAY-Z, Travis Scott, Kid Cudi and more. “Drake had a Future feature, and I aspire to be like Future,”  ​Jusuf Hemrekovic (11, HSU) said.

London Sweeney (10, HSU) agreed. “My favorite feature is probably Love All just because of the beat and how chill it is,” she said.

Some students, like Justin Pham (12, MST), thought neither album was anyones best work. “I usually like Kanye’s music more than Drake’s, but Donda and CLB were both mid. Donda was overhyped and not that good while CLB was just okay,” he said.

Despite differing opinions, there is no debate that both artists are some of the most influential artists in the past two decades and both albums have their fan appeals.