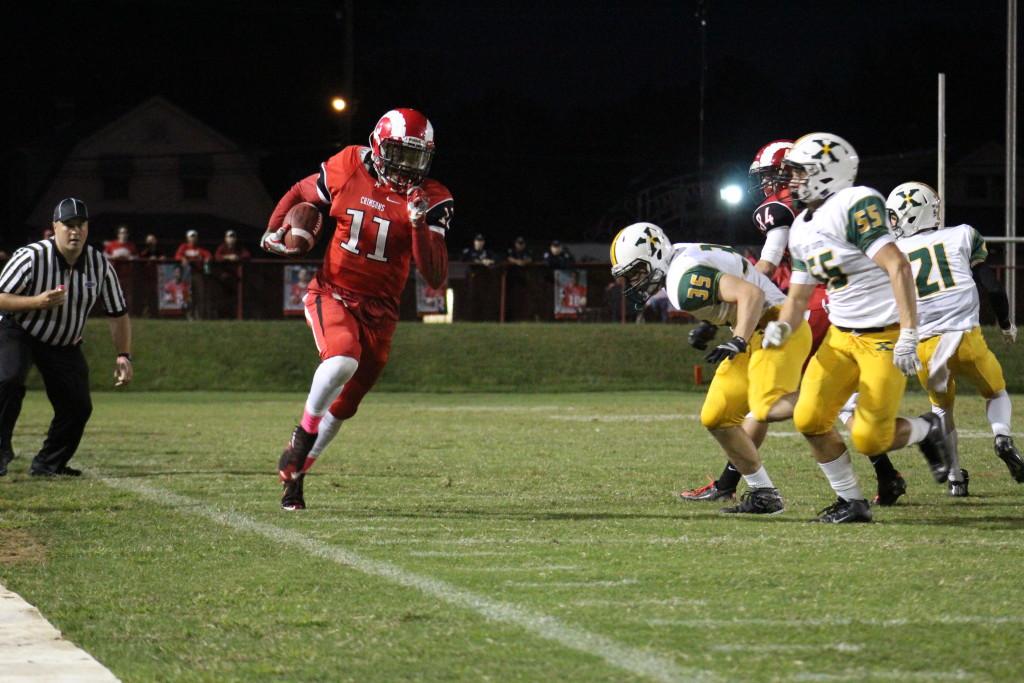 Jaelin Carter (11, #11) skirts past St. Xavier defenders in the first half. Photo by Kate Hatter

First half:
The Crimsons were looking for their sixth win on the season. Manual had to punt after only three downs sent the ball 13 yards downfield.

Manual tried to respond but St. X linebacker Benjamin Marks (#13, 12) intercepted a third-down pass by Darien Wilson (#15, 12). A repeat of the last touchdown drive occurred for St. X, with Sivori once again passing to an open Boehnlein in the back of the endzone.

After the extra point, St. X led 14-0 at the end of the first quarter.

“I feel like our problem tonight was that we underestimated them, you know we’re both good teams but we needed to be locked in the entire time.” said Manual defensive lineman Christopher Jones (#58, 10).

Manual again had the ball and charged to the 17-yard line but struggled to fight through the defense. They instead settled for a successful PAT from kicker Liam Spurlock (#89, 12).

After a quick stop, Manual seemingly scored a 52-yard touchdown pass from Wilson to wide receiver Curtis Reardon (#2, 12) but an offensive holding penalty reversed the touchdown.

At the end of the first half, St. X led Manual 14-3.
Halftime:
JaWaun Northington (#22, 12) and Kylie Seraphine won homecoming king and queen for the year.

Second half:
Manual started the second half with the ball at their 20-yard line following the kickoff and fumbled the snap, which was recovered once again by St. X’s Benjamin Marks.

After a quick drive, Sivori ran into the endzone for a touchdown and another extra point by Wolford made the score 21-3. A short rushing touchdown followed from Sivori, as the lead extended to 25 points.

Manual tried to get back into the game with a 32-yard run from Wilson, but he then threw an interception into the hands of Benjamin Marks, marking his second pick of the day. The third quarter ended with a score of 28-3 for the visitors.

Another Manual drive ended abruptly, this time with St. X linebacker Jake Borland (#59, 12) taking a missed Wilson to throw to the 8-yard line.

Like his fellow linebacker Marks, Jack Borland followed up his first interception with a second, this time a pick-six on the next Manual possession, taking the ball 20 yards for a touchdown.

“The turnovers didn’t help, but they happen. We tried to do everything on defense and got some good stops. We just need to work on our offense, and fix miscommunications and all that.” Jones said.

With around eight minutes remaining in the game, Wilson found Curtis Reardon (#2, 12) for a 34-yard pass down the sideline before JaWaun Northington (#22, 12) punched the ball in for Manual’s first touchdown of the game, taking the score to 35-10.

QB Darien Wilson hands off to #22 Ja’Waun Northington for Manual’s first touchdown of the night. The score is now 10-35 with 7:50 left in the 4th quarter.

The final touchdown came as cornerback Jason Appel (#47, 11) intercepted a Manual pass and fumbled 15 yards into Manual’s endzone to end the game as St. X won 42-10.

The Crimsons take on the Pleasure Ridge Park (PRP) Panthers next Friday at 7:30.