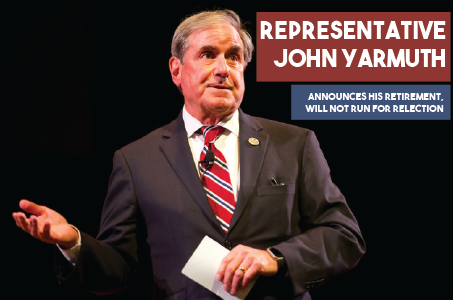 Tuesday, Louisville’s congressional representative John Yarmuth announced that he would not seek another term as representative for the Louisville third district. Rep. Yarmuth who is 73 and will be 75 by the end of his current term in Congress cited several reasons for his soon retirement from public life. Among those were spending time with his family in Louisville, his age, and wanting not to spend his last years in Congress.

It’s been an incredible journey since my first campaign in 2006 until now. I will continue to fight for Louisville in Washington for another 15 months, and then, I will retire from Congress.

I will have plenty more to say in the months ahead but this is what I want you to know: pic.twitter.com/MXFmWrSTYv

Yarmuth has had a unique career when it comes to politics. Yarmuth began his career as a “Rockefeller Republican,” Republicans seen at the time as moderate and outside the mainstream of the Republican Party during the 60s and 70s. During his early career he worked as a legislative aide to Former Kentucky Senator Marlow Cook from 1971 until 1974. After his short stint in D.C., Yarmuth moved back to Louisville where he founded the Louisville Today magazine which operated from 1976 to 1982.

In 1990, Yarmuth founded the Louisville Eccentric Observer (LEO), a weekly newspaper which was generally viewed as a more liberal newspaper. In 2003, Yarmuth sold LEO but remained on its board as a consultant

When Yarmuth decided to run for the Louisville seat in 2006, he stepped down from the board. In an upset, bellwether victory, Yarmuth beat incumbent Anne Northup as part of the Democratic wave of 2006, where Democrats gained control of both the House of Representatives and the United States Senate.

Throughout his years in Congress, Yarmuth has increasingly become more progressive and has gone as far as to support ideas such as Medicare-for-All and a $15 minimum wage.

With all of this being said, Yarmuth drew a primary challenger earlier this year in Attica Scott, a State Representative from Louisville. Soon after Yarmuth announced his retirement, State Senate Minority Leader from Louisville, Morgan McGarvey threw his hat in the ring. This is a unique scenario considering that both McGarvey and Scott are both Manual graduates and are both inducted into the Manual Hall of Fame. There is also speculation that Mr. Yarmuth’s son, Aaron Yarmuth may throw his hat in the ring as well.

With the news that our outstanding Congressman John Yarmuth is retiring, I’m excited to announce my bid for US Congress in #KY03!

As the primary season goes on, it will be interesting to see how this match-up presents itself. Scott has let it be known that she will be the progressive candidate in the race. Though, that position may be hard to gain as both McGarvey and the younger Yarmuth have presented themselves as progressives as well. The most common sense route seems to be where McGarvey moves the center and showcases his leadership and experience as Senate Minority Leader and Scott presents her well known progressive politics and experience within the Kentucky General Assembly. If Aaron Yarmuth were to run, it would make sense for him to center himself between the two and try to pull from both and gain voters who are not keen to Scott’s more progressive politics or aren’t as moderate as McGarvey presents himself during the race. Of course, this is all hypothetical and the race may pan out completely different than what is present with us today.

For more of RedEye’s coverage on Louisville’s 2022 congressional race, make sure to follow our column discussing the case for each candidate running in the race.