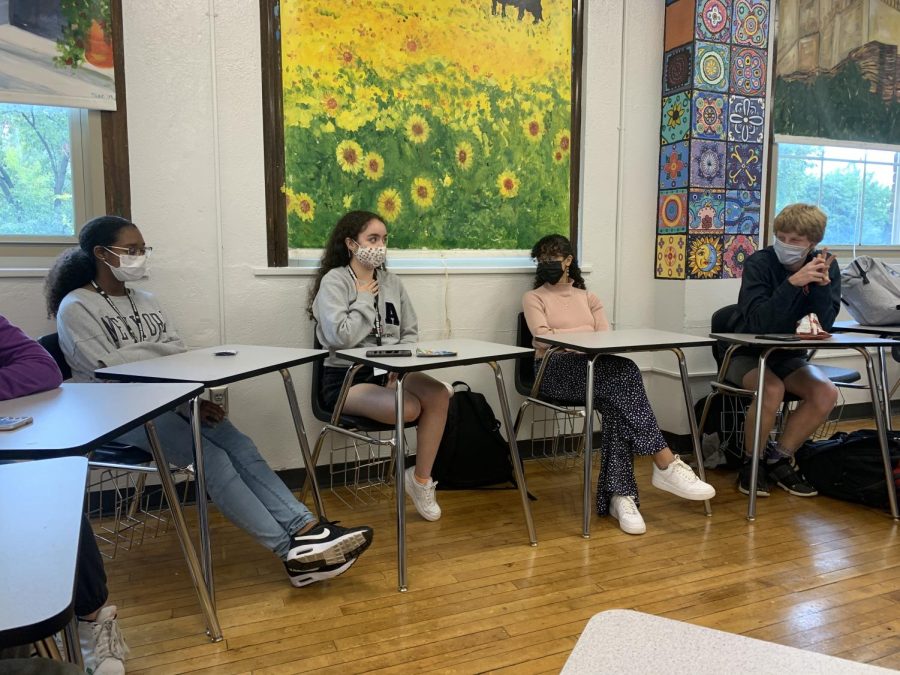 The circle listens closely to Diaz as she recalls her mother asking if she wants to put her teacher's name in the fridge. Photo by Mish Quan.

Manual’s Latino and Hispanic Student Organization (LAHSO) and Allies commemorated Hispanic Heritage Month with their annual panel on October 15, the last day of the observation. The month originally began as Hispanic Heritage Week but then was expanded into a month in 1988. The month is dedicated to celebrating people of Latin American origin and includes the independence days of many Latin American countries like Guatemala, Mexico, and Costa Rica, signifying the month as a time representative of freedom and cultural ownership.

LAHSO and Allies brings together the diverse cultures of Latin American students of Manual. To close Hispanic Heritage Month, club officers first presented the history of how their own ethnic countries gained independence, including Mexico, Cuba, and Ecuador.

Andres Aguirre (12, MST), vice president of LAHSO, otherwise known as Senor Taco from an “incident in last year’s panel,” showcased a video of Mexico’s President Obrador chanting Grito de Dolores on September 15, a tradition stemming from the battle cry of the Mexican War of Independence.

Afterwards, everyone within LAHSO sits together—Socratic Circle style—to share and discuss the differences and similarities of their cultures.

The club’s president Elizabeth Diaz (12, HSU) opened the conversation to superstitions her Cuban real estate agent mom believes like writing the name of someone who is bothering you on a piece of paper and putting it in the fridge so they can “chill out.”

Reflecting on the panel, Leonardo Mulet oliva (10, HSU) feels like he found a place within Manual that allows him to communicate and fully express himself in terms of his cultural and historical background.

“When I first came to Manual, I didn’t really see that there were many Latinos or that there were many people from Latin America themselves,” Mulet oliva said. “Before I came to the club, I was like ‘Oh, there’s probably only gonna be like 2 or 3 people,’ and then I come here and I just see this whole group of people talking and switching between Spanish and English.”

When Ms. Ana Castro (Spanish) first started Manual’s LAHSO around 10 years ago, that’s exactly what she wanted for students: a safe place for Latinos and Hispanics to share their cultures with each other.

“Sometimes as a community, we are not so close because we are so diverse that it makes it kind of hard,” Castro explained. “But that sentiment—we need a space; we need to educate people; we need to share all our cultural backgrounds, where we come from, who we are with the rest.”

As part of Hispanic culture, all of LAHSO’s parties to celebrate events like Dia de Los Muertos, for example, are open to everyone. They emphasize that the club is LAHSO and Allies to show that all Manual students are welcome to indulge in celebrating Hispanic history and culture. One way they’re doing this is by connecting with Manual’s other cultural groups like the Black Student Union and Asian Student Community.

“I’m happy that we did it because I feel like that the organization grew a lot and I like how it feels this year,” Cuban-born Ms. Castro said. “It feels like home.”