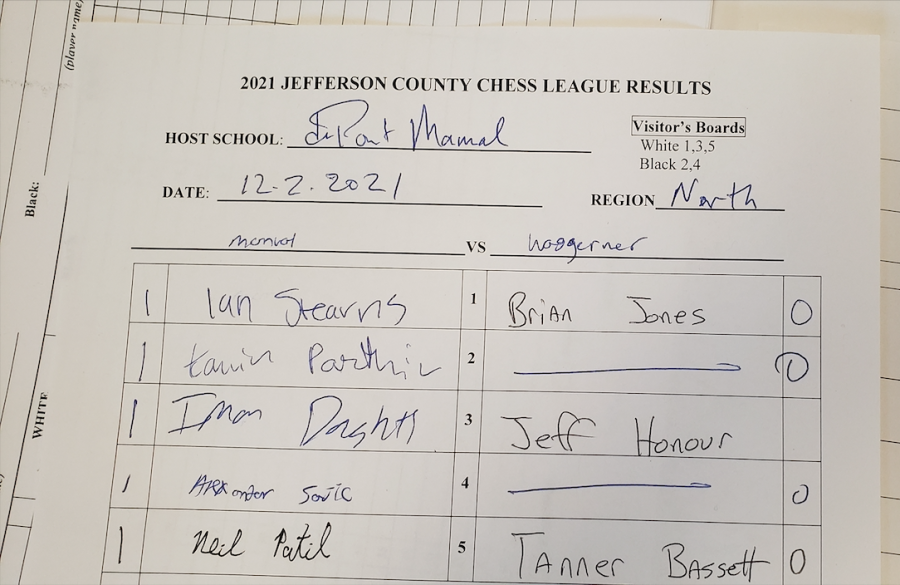 A score sheet depicting the outcome of the chess match. Photo by Jackson Barnes.

This story was submitted by Jackson Barnes (10, J&C).

On Thursday, December 2, Manual defeated Waggener High School in a home game chess event. Manual had not previously played Waggener this season, so this was the first time any of either team’s players had gone head to head. However, before the match even began, Waggener forfeited tables two and four before the event began due to a lack of available players.

The remaining tables were one, three and five. At table one was Manual’s Ian Stearns (12, MST), facing off against Waggener’s Brian Jones. Table three was Iman Dashti (12, MST) against Jeff Honour. Finally, table five was Neil Patil (9, MST)  from Manual facing Tanner Bassett from Waggener. The first two games were won relatively quickly, with both Stearns and Dashti beating their opponents. Patil’s game, however, lasted quite a bit longer, the two players going toe to toe for almost the entire allotted time.

All Manual players won their games and the final scoring came down to five points for Manual and zero points for Waggener. Even though only three games were played, the forfeited tables were an automatic two points for Manual. With the results of this match, the Manual team progresses further on their journey to state, which has not happened in two years due to COVID-19 shutdowns. After this match, they have one more against Brown on Dec. 9 before the current season ends. Before the shutdowns, Manual was undefeated for five years in a row, and they hope to keep that winning streak up after coming back.