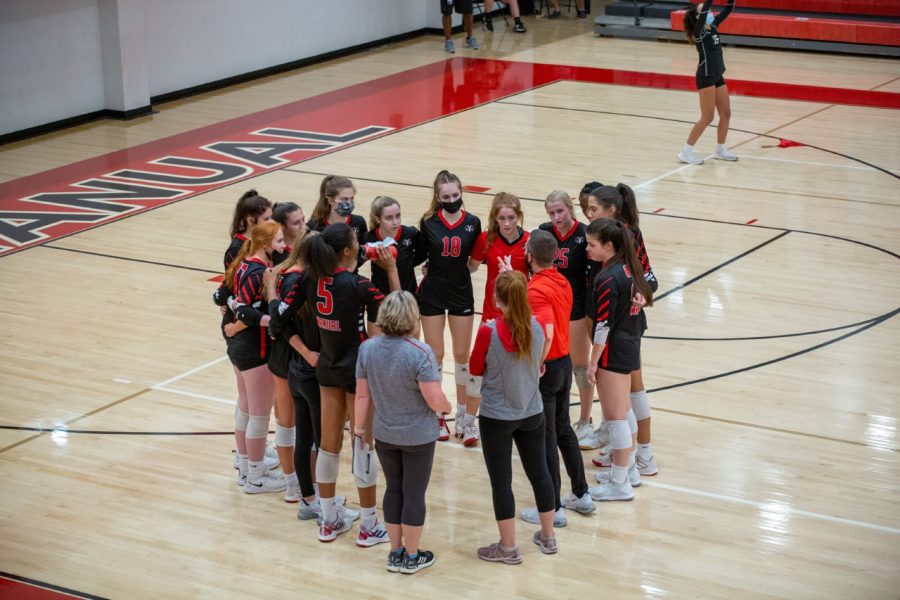 This story was submitted by Kaylynn Berry (10, J&C).

Manual Crimsons girls’ varsity volleyball defeated the Seneca Redhawks in an intense five-set game following the JV and freshman teams’ clean sweeps on October 4. After the Crimsons took the first set 25-15, Seneca won the next two sets 16-25 and 18-25, then the Crimsons took back the fourth set 25-17 and won the final set 15-11.

“The girls played really tough tonight. I’m really proud. A lot of people stepped up today and did some things they never even practiced before. It was just a good thing to see. I think that you just see the growth in them every single day and I’m really proud of them,” Head Varsity Coach Richard Weaver said.

This all followed Manual’s undefeated JV team sweeping with final scores of 21-15 and 22-20. Many of the girls on JV shared about how much chemistry the team has and how much they love their other teammates. “The chemistry on JV is insane. The vibe on the court makes you want to put out your best every single day,” Sydney Webb (10, #15) said.

The freshman team started out the night strong with a two set sweep with scores of 21-11 and 21-9. “This team means so much to me, and I know we are going to crush it. These girls are some of the nicest and funniest people I have ever known. I know that I have made some of my best friends,” player Abby Gentner (9, #20) said.