Acknowledging the mental health of students 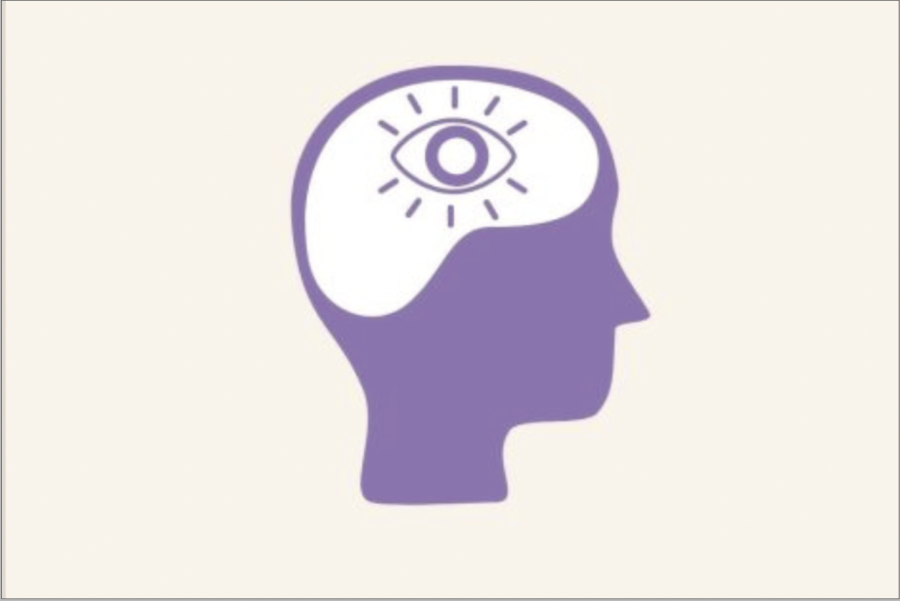 Graphic details: acknowledging mental health through the visual of the eye and the person. Graphic by Yaara Aleissa.

Over the three versions of NTI that students and teachers have endured, each has provided improvements, although the struggle of sitting in front of a computer for hours remains.

Zoom fatigue is the feeling of mental fatigue caused by sitting in front of a screen for hours. Student screen time has increased as their seven-hour school days have shifted virtually. For many, NTI is a feeling of being locked into the screen, only having an hour away from the blue light reflected onto them. However, the consequences stretch far beyond just Zoom fatigue. The many challenges that come with both facilitating and participating in virtual learning. Alternatives could be having printing out work to receive that paper to pencil interaction that reflects some “normal” habits, but that is not an accessible option for all students.

There are two sides to the spectrum.  Some students saw a boost in their mental health, especially NTI 1.0. Students were able to relieve themselves from the stressful environment of school though students were still hopeful their school year would end in May. What many were unaware of was it would be over a year before the halls of schools would be open for students to walk down.

On the latter, the early months of quarantine faded away, while fear of the ongoing pandemic crept in instead. New versions of online learning followed, and class durations became longer and mentally challenging. Excessive amounts of close-up eye contact for hours on end are unhealthy and straining.

In the second version of NTI, students had a one-day break, which some students used the day to relax from the chaos. For some, NTI was just another day to catch up. The learning experience has diminished through virtual learning. As hard as it was for the student, the facilitators of the virtual school had some of the same difficulties.

Since then, House Bill 44 was passed on January 18, 2022 requiring that schools recognize mental health as a valid reason for an excused absence. Under that bill, a student “shall have the opportunity to make up school work missed and shall not have his or her class grades adversely affected for lack of class attendance or class participation due to the excused absence.”

Recent research studying online school specifically during the pandemic reveals a few solutions for some students to advocate for their mental health during virtual school to have some sense of familiarity to their “normal” habits: “1. Open cameras when necessary 2. Avoid requiring school uniforms during online classes 3. Take regular classroom breaks and avoid multitasking 4. Mental health promotion training for teachers 5. Promote self-care activities”. Each of these solutions is variable by the school since they are responsible for their NTI directives; however, a perfect version of the platform is near impossible when so many of the factors are uncontrollable.

The lack of social interactions is a huge factor for students. A solution with good intentions is break-out rooms. Break-out rooms are a common way for teachers to fuel student-to-student communication. Though, in most cases, that resulted in long awkward waits for the end. When the district announced a return to in-person school, many students were hopeful of a return to normal. “Normal” never came, and students had to readjust to the repercussions of being away for over a year and forgetting how they possibly managed a schedule of both learning and social activities. The Kentucky Counseling Center touches on the years of experience teachers have in the classroom. Teachers were never prepared or expecting a virtual shift so rapidly. They note the number of viral social media trends involving teachers during online school and that “teaching using technology devices has not been their best asset.”

In February 2019, JCPS approved funding for mental health practitioners in every JCPS school. Alongside this, there is suicide prevention training once a year for schools. At the end of the training, students report their mental health status. Teachers need to receive proper training for compassionate conversations with their students to help spark conversations of mental health.

Kaavya Thirumurugan (10, MST), shares her experience with mental health discussions in the classroom differs from the frequent ones she may have amongst her friends: “[I]n terms of classes, I would say though it is talked about somewhat generally, “mental health” is only prevalent during mandated training such as suicide prevention videos…however, some of my friends and even a one to two of my teachers don’t seem to take students’ mental health into consideration and only seem to care during mandated training,” Thirumurugam said. Thirumurugam feels that her teachers “stick to their word” in advocating for her mental health yet the heavy workload assigned deems contradicting.

The physical health of students are easily answered, though the mention of physical health is  commonly replaced with a symptom of a struggle in mental health that holds a heavier weight, there is no “day’s off” for feeling mentally unprepared to handle a seven-hour day in school.

NTI has challenged the mental health of students, however the burst of resources for mental health fell through until during the pandemic. NTI 3.0 has heightened students’ fear, despite their hopefulness of not falling back into old habits.

In addition, the new grading system that JCPS proposed with a mastery category ranging from  70 to 90 percent has added to the stressor students face. Mariam Aden (9, VA) touches on how this new grading system has limited conversation of mental health in the classroom when the attention has shifted towards attaining high test scores and preparing for those assessments: “They kind of just give you what they want you to get done just to pass our class and stuff, and then I guess the new grading system has kind of also made it that way because it’s more focused on if you pass your tests now”. However, the classroom environment felt like a safe relief for her to express her mental health concerns especially when the teacher themselves voiced their troubles, “the teacher would share their personal experiences with stuff and that would kind of give leverage to students to be able to share,” Aden said.

To combat some of these issues, students need days to rejuvenate themselves during the school year. Staying home from an illness is a plausible reason for an excused absence, so what makes mental health any different?

High school students have some control over their courses and the workload that coincides with those classes. However, the amount of time spent on each class  assignment in a single night should be a predictable average for the student. Consistency can give a student more reliance on how to plan out their schedule with their other classes.