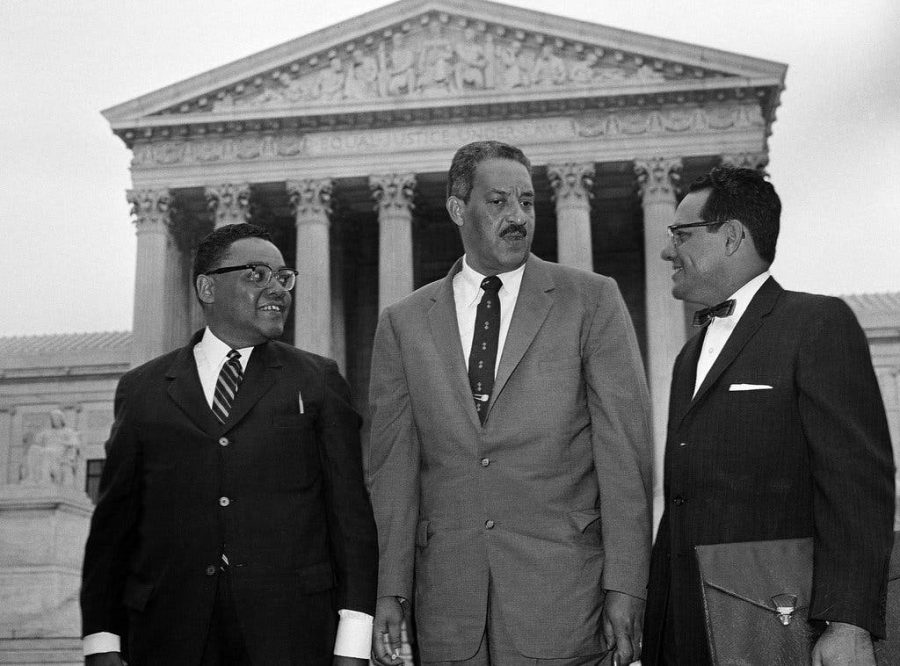 William T. Coleman, left and Thurgood Marshall, middle outside the Supreme Court in 1958.

When you think of Brown v. Topeka Board of Education, oftentimes you think of Thurgood Marshall arguing the case for desegregating public schools within the United States.

A name often left off the record books, or simply not mentioned is William T. Coleman. Through a long career of public service, Coleman fought for Black civil rights, expanded opportunity within the transportation department, and led through with the Republican Party.

Coleman was born in Philadelphia in 1920. Coleman was no stranger to the effects of racism and segregation, even from a young age. Coleman’s mother had lineage which represented the Episcopal Church back six generations. With those connections,  Coleman’s family often received the visits of W.E.B. DuBois and Langston Hughes.

While attending an integrated school, he was one of only seven black children at his high school, but he still faced every fight of being Black in America at the time. When giving his honors presentation, which was well-received, his teacher said “Someday, William, you will make a wonderful chauffeur,” which prompted Coleman to birate the teacher and receive a referral.

Coleman faced similar challenges when he tried to join the segregated swim team. After demanding he be given entry, he was suspended from school once more. Then, the swim team disbanded instead of letting Coleman join. Soon after Coleman graduated,  the swim team was then formed again.

During his senior year of high school, he was accepted into the esteemed University of Pennsylvania where he double majored in both political science and economics. When given the opportunity, he joined one of the Devine Nine fraternities, Alpha Phi Alpha.

After graduating from the University of Pennsylvania, he was accepted into Harvard Law School but soon left to help with the war effort during World War Two. He returned to Harvard after the war and became the third black staffer to be on the Harvard Law Review.

After graduating from Harvard Law, he was granted a clerkship in the Third Circuit Court of Appeals. He was then selected to be a clerk for Supreme Court Justice Felix Frankfurter in 1948. He was the first Black law clerk in Supreme Court history.

Coleman, after his historic clerkship, was hired in private practice for some time and was then recruited by Thurgood Marshall to help with the Brown v. Board of Education case in 1954

With the Brown case, Coleman and Marshall worked together on both the legal strategies and co-authored the brief in the case.

During his early legal career, Coleman spent significant time fighting for civil rights and the expansion of protections for Black Americans. He served on the NAACP’s national legal committee and served as President for the NAACP’s Legal Defense and Education Fund. He was co-counsel in the case McLaughlin v. Florida, which struck down a Florida law that made it a crime for interracial couples to live together.

Coleman, during the Ford administration, was nominated and confirmed to be the fourth Transportation Secretary. He was the first Black person to head the department and was well-received as such.

After Coleman’s time serving as Transportation Secretary, Coleman went back into the legal realm and argued 19 cases before the Supreme Court. The most famous after serving in the cabinet was Bob Jones University v. United States. The case dealt with tax exemptions for religious universities. Coleman won the case for the government.

In all, Coleman was an unsung hero for the rights of Black Americans and shepherded a new era for them. He pioneered a genuine and quet path and served for the common good. This country owes a lot of its liberties and freedoms to the work Coleman did.