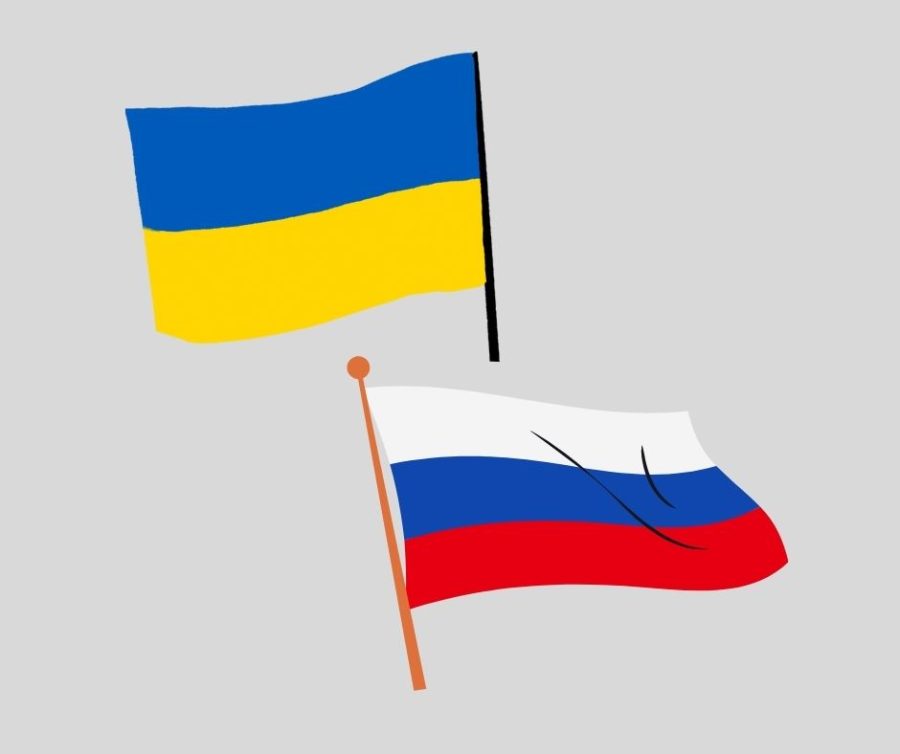 Flag of Ukraine and Russia as the war continues to siege between the two nations. Graphic by Yaara Aleissa

Today marks day 13 of the Russia-Ukraine war. It has been referenced as a “conflict” a “crisis” or “invasion,” but to Ukrainian Ollie Koshelieva there is no illusion that this is anything less than a war. The use of these phrases in the media is apparent, though “if you are not comfortable using the word war, use the word conflict,” Koshelieva said. For many Ukrainians, including herself, this is far beyond conflict.

Over the past ten centuries, Ukraine has rebuilt its geography and culture.

In 1793, Russia annexed Ukraine and under a policy known as “Russification,” the Ukrainian language was banned, causing people to convert to the Russian Orthodox faith.

It was not until 1991, the collapse of the Soviet Union, that Ukraine became its own country. Even within the country, there are divides between eastern and western Ukraine, eastern Ukraine having “stronger” ties to Russia since they have been under Russian rule much earlier. For this reason, there are also divides during presidential elections.

This historical overview is brief and only glimpses of the trauma faced by Ukrainians that range much further.

Despite the history between the two countries, Russian President Vladimir Putin recently declared that “Russians and Ukrainians are one people, a single whole,” explicitly disregarding any sense of individuality for the two nations.

Ollie Koshelieva is a Ukrainian-born citizen that moved to the United States in 2014 with her husband. Their move was a choice of their own, and not pressured by events in Ukraine at the time but instead urged by the uncertainty of the future.

“We both agreed that having and raising children in Ukraine would have probably been out of the question because we could not guarantee their safety, and that was the scariest part,” Koshelieva said.

Back in Ukraine remains the entire intermediate family, extended family, and friends of Koshelieva and her husband. Her life was in Ukraine, as many of her relationships remained there.

Since the beginning of the Russian-Ukraine war, she describes her communication routine with her family that often results in her sleepless nights.

“Before I go to sleep, I check if everyone’s okay and then I wake up and I do the same thing. Ukraine is seven hours ahead of us so when it’s midnight here it’s seven in the morning there,” Koshelieva said.

Despite not being in Ukraine firsthand, Koshelieva still feels the emotions deeply. For her, the days are not numbered by the calendar but by the day of the war.

“This morning, when I looked at the calendar, I was writing something, and I’m like okay March 3, I have a doctor’s appointment for my son, I have this and that. But for me it’s not March 3, it’s day eight,” Koshelieva said.

Before moving to the United States, Koshelieva studied at Kharkiv National University, where she graduated with a master’s degree in Journalism.

This same city is one where her friends reside and have resorted to hiding in subway stations, with many other Ukrainian citizens searching for shelter.

“This is the city that I used to study at and there’s active shelling, active bombing, and there was no power for a while in some parts of the city,” Koshelieva said.

In 2014, Crimea was annexed and controlled by Russia. One instance that Koshelieva recalls as “the big[gest] protest” during her time in university was the Revolution of Dignity that began in November 2013 against former President Viktor Yanukovych.

“Students protested against the decision of our government to stop the European integration. They were beaten up by military forces and police in the middle of the capital of Ukraine,” Koshelieva said.

Currently, Ukraine Koshelieva’s family resides in what is considered “the safest location within Ukraine.” However, this does not stop the worrying thoughts that consume Koshelieva. When asked about the coping mechanisms, she describes a two-hour marker she sets for herself to ease any frightening thoughts.

“Luckily, I’ve never had anyone not respond to me more than two hours because that’s like my time after two hours [that] I start panicking. Within two hours people can be hiding, people can be doing something charging their phone and so forth,” Koshelieva said.

Through living in the United States, Koshelieva has also been able to experience more of her Ukrainian culture that was not so prominent back in Ukraine. Koshelieva was born the same year as the dismantlement of the Soviet Union. Her parents and grandparents were still coming out of this time.

A year after moving to the United States, Koshelieva established herself as a long-term volunteer with Maya’s Hope, a non-profit. The president of the non-profit is half Filipino and half Ukrainian, making those two countries her focal point. This organization has served as a key for Koshelieva enabling communication with families in Ukraine and relying on one of her main coping mechanisms, action.

“I cannot sit still and wait or just do nothing, I need to act…If I was there I would be in the middle of the fight already,” Koshelieva said.

However, an unsettling realization has faced Koshelieva the terms of the duration of the war that Ukraine will face.

“This will sound scary, and I still try to wrap my head around this phrase, but it [Maya’s Hope] helps me make peace with the war. I never ever thought in my life that those two words can be in one sentence, and it is not the name of the infamous War and Peace by Leo Tolstoy. I made my peace with war. This thought occurred to me and I keep thinking about it every day,” Koshelieva said.

Maya’s Hope is currently raising money to help support the necessities needed for Ukrainian children with disabilities that currently lack the resources they need.

“There is a huge shortage of supplies and currently we are trying to find ways to help children’s hospitals and maternity wards like orphanages that have infants because they do not have basic needs like diapers or formula,” Koshelieva said.

For now, these coping mechanisms are what settle Koshelieva’s worries, but her fears remain prominent. Education sets her free and knowing that she can do her part in raising the next generation, a “conscious generation that will never let another war happen ever again” is her dream for the future. There is no set and stone procedure for handling the tragic news of war, which varies from person to person. A lending hand and an open mind go a long way in attempting to imagine what it is like for the people of Ukraine, hearing shells falling on their homes.