A guide to the 2022 Louisville mayoral election 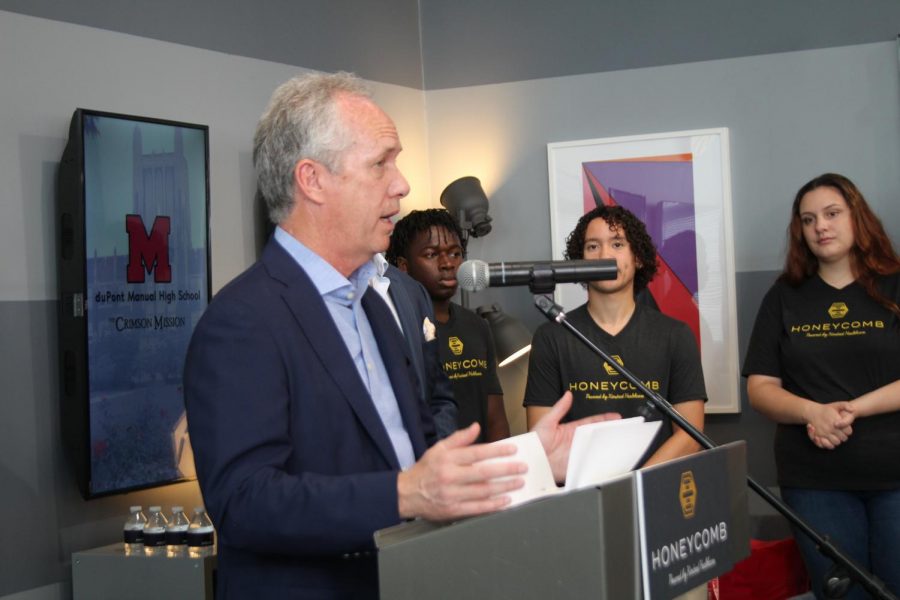 Louisville Mayor Greg Fischer discussed how education is progressively getting more advanced and how technology will play a role in this, Photo by Maddie Gamertsfelder.

The city of Louisville will be holding its mayoral primary on May 17, 2022. This primary will decide who the two main candidates (one Democrat and one Republican) will be for the general election, which will take place on November 8, 2022.  Many are looking to replace Incumbent Democratic Mayor Greg Fischer (who has served his third and last possible term) in office, but there is a strong likelihood that the party in charge will remain the same. It has been almost 60 years since the last Republican mayor; however, that won’t stop these candidates from trying to make history.

The favorite to win the Republican nomination at the moment is Bill Dieruf. He is the only current mayor running for the office, presiding over Jeffersontown. While there is no official polling for this election, his fundraising numbers have dwarfed his conservative compatriots. Dieruf runs on a very nonpartisan platform, appealing to the common man instead of party affiliation. This makes sense, as Democrats greatly outnumber Republicans within the Louisville Metro area. Dieruf’s most notable achievement in Jeffersontown is perhaps the Angel Program, which helps substance abuse victims receive proper treatment.

Hall is a duPont Manual graduate who also runs the nonprofit Get Better Every Day, a sports-based mentorship targeted towards teens. He also serves as a minister and is the youngest conservative in the running.

Molestina is a pastor of Ecuadorian descent and wants to prioritize community service and connections between residents. Reishman is a healthcare consultant who has stated that he would refuse donations and run with a pro-police platform.

The favorite to win the Democratic primary and the overall election is Craig Greenberg. Greenberg is the former CEO of the 21c Museum Hotels and is a Harvard alum. The former attorney wants to expand Louisville as a business entity and improve public safety, one of the main issues the candidates have discussed. Greenberg has raised the most donation money and has high profile endorsements from several Metro council members and from Mattie Jones, a civil rights activist.

Findley Jr. is a pastor from Newburg and a leading figure in the Louisville civil rights scene. He has campaigned on the promise to try and unite all people, just like they are in his church.

Parrish-Wright is a civil rights activist and nonprofit manager for the Bail Project, which helps pay bails for people who can’t afford it. She also campaigned for the termination of the cash-bail system in Louisville. Parrish-Wright champions herself as a populist and is the only major female candidate in the running.

Other candidates include Skylar Graudick, Colin Hardin and Anthony Oxendine. Graudick is the youngest running Democrat, a former construction worker who portrays himself as a moderate Democrat with a very pro-police stance. Hardin is a former server who wants to create a base income program, as well as get  marijuana and other similar substances legalized. Oxendine is a funeral home owner who has dealt with many gun violence victims in his profession. His main goal, if elected, is to reduce poverty and violence within the city.

It’s important for voters to remember that Kentucky has a closed primary, meaning that only those registered as either Democrat or Republican can vote for their own respective party candidate nominees. This means those registered Independent or otherwise cannot participate until the general election. Regardless of who wins the Louisville mayoral election, it will be a new name on the ballot for voters to mark down.