“But darling, it’s all absurd” inside an American Girl meme account 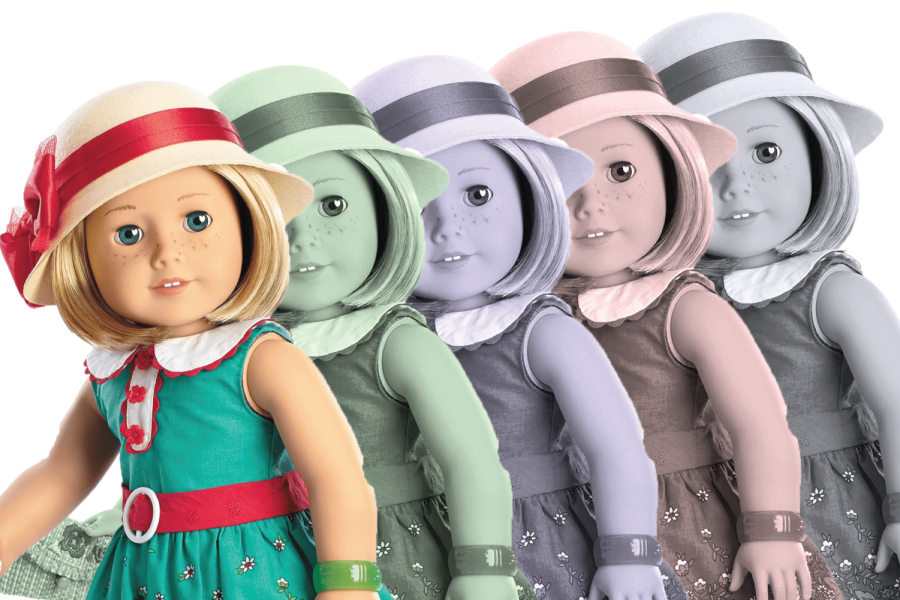 American Girl dolls captured the imagination of many young Americans when they were first introduced, now they make perfect meme material. Graphic by Brennan Eberwine

For many Gen Zers and Millennials, one of the defining brands of our childhoods was the American Girl doll line that portrayed different stories and struggles of, well, American girls, in 18-inch doll form. From the Swedish-immigrant turned Minnesotan Kirsten Larson to the plucky, FDR-loving depression-era girl Kit Kittredge, the dolls were a major part of many young Americans’ lives. As we’ve grown up though, we didn’t totally leave them behind. Except instead of playing with the dolls, now we make memes out of them.

One of the most popular American Girl meme accounts is the comically-named “klit.klittredge” account, which has amassed 50,000 Instagram followers (referred to as girlbosses) as well as 32,000 Twitter followers. The creator behind the account is 24-year old native Kentuckian Lydia B. who started the account after a TikTok she made comparing marijuana being the gateway drug for heroin to the dolls being the gateway for leftism went viral. Sadly, the original TikTok was taken down for advocating drug use, but from there she created the account and has been posting “klitical content” ever since.

Lydia, like many other Gen Z and Millenials, was obsessed with the dolls as a kid. Every year for Christmas her grandmother would give her an American Girl Doll. She’d take them to her church where she’d get handmade clothes by Southern Baptist church ladies for her dolls. Her favorite doll was, obviously, Kit Kittredge, which recently had its heels chewed off by her dog, Blue. But what she didn’t know was that those dolls with church clothes would create an impact online for other Gen Z and Millennials who grew up with the dolls. Also that it’d be the perfect trojan horse for marxism.

As a “chronically online” person, Lydia has been behind several meme accounts in the past,including an account she made in high school with 200 followers that dissected the fashions of US Senator Rand Paul. However, none of her previous accounts had made a splash quite like klit.klittredge did.

From cheeky photoshops of Karl Marx holding Kit Kittredge and 70s activist doll Julie Albright handing out “Property = Theft” pamphlets to her fellow citizens, Lydia’s account has never shied away from the political, a spirit that she took from the dolls.

“The Kit Kittredge book talks about a girl whose father had to eat at a soup kitchen, and she talks about how she supports the President’s New Deal.” Lydia said. Though the books and the dolls were not as radical as she remembered from when she was eight, she still felt they informed her perspective in an important way.

“I was growing up in central Kentucky. My dad worked at the church. It was a pretty homogenous community; we all looked alike and thought alike. And this really was a way to break into this crowd, the idea that the American narrative of what it means to be an American Girl and who’s an American girl, is diverse.”

One of the accounts most popular series of posts are issues guides, in which each doll gives their opinion on any given issue. Ranging from their opinion of the Supreme Court (Progressive-era trust fund orphan Samantha Parkington was not a fan of Lochner v. New York for example) to their opinion on abortion. They carry a political spirit while also including nostolgia that resonated with a lot of people.

“This account has sort of blown up not because of my own sort of success or genius or anything, but just because I think I am particularly plugged in to the cultural zeitgeist and what it means to be online, and my experience of what it is to be someone living in their 20s in the 20s in America.” Lydia said.

In a weird way, the American Girl dolls have become a part of the history they portrayed. Unlike Barbie or any number of other properties we were exposed to in our youth, American Girl’s historical elements have made them appealing in our contemporary context.

What it seems to mean to live in the 2020s is to have perseverance in the face of unprecedented event after unprecedented event; we’ve all, in essence, become a 2020s version of the American Girl dolls. As we struggle in our moment in history, it’s no wonder we’re obsessed with memes of these dolls and their unfeeling, dead eyes that proclaim “profits are the unpaid wages of the working class.”

As for Lydia, she said she’ll keep making klit.klittredge content as long as it’s fun, or until Gen Z has moved on to the next nostalgic media brand to meme.