Parent goes before JCPS Board of Appeals, arguing for ban of “Gender Queer” 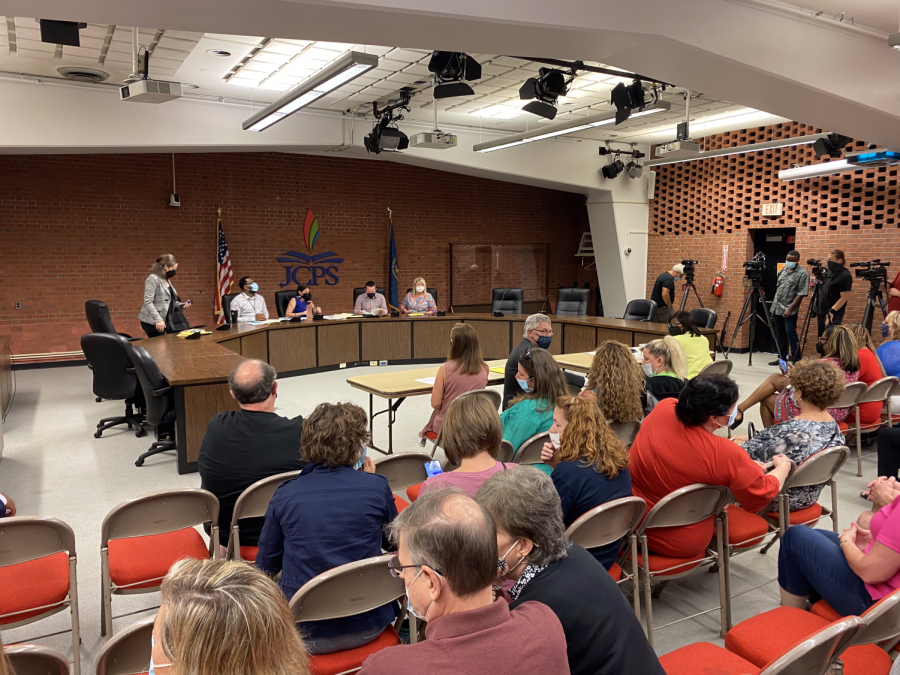 A crowd sits in VanHoose Education Center before the appeals meeting on the banning of "Gender Queer" comes to order. Photo by Brennan Eberwine

Today a parent spoke before the JCPS Board of Appeals in hopes of removing “Gender Queer: a Memoir” from two JCPS school libraries. Miranda Stovall appealed to the board made up of parents, teachers, and school administrators after Liberty High, and 6-12 Phoenix School of Discovery declined to remove the book from the shelves.

“Gender Queer” is a graphic novel by Maia Kobabe (who is non-binary and uses e, em, eir pronouns) that recounts eir adolosence and discovering eir gender identity and sexual orientation. The book has won numerous awards including the American Library Association’s Alex Awards. Beside being prestigious, the book has also proved controversial as one of the most challenged books in 2021.

Stovall and her attorney, Clint Elliott, contended that the graphic novel was “pornographic” and should not be in schools citing Kentucky laws on obscenity. Elliott likened the book being available in libraries to rape. “Gender Queer” contains a few scenes with nudity or sexually-explicit images, which Elliott contended negates any literary value and that the book hasm thus does not pass the “Miller Test” (a legal standard used when determining if an expression is obscene.)

This appeal comes after a surge in conservative activism invested in banning a myriad of concepts from schools such as critical race theory along with plans to create more conservative school boards. Steve Ullum, a school board candidate for District 3 in JCPS, was in attendance.

Stovall, whose children do not go to either school, first found out about “Gender Queer” through No Left Turn and positioned herself as the “voice against obsecenity in JCPS libraries,” having made complaints against several other LGBTQ+ books such as “Lawn Boy” by Johnathan Evison.

Some on the panel questioned why this book was different from other books such as “The Giver” by Lois Lowry and “Romeo and Juliet” which also have sexually-explicit scenes. Elliott answered that “Gender Queer” has those themes woven throughout the book and is thus more obscene.

Stovall was joined by several protesters, many wearing green felt strips to signify that they were “anti-pornography.” Some were also members of the national right-wing parents group No Left Turn, who oppose “the radical indoctrination in K-12 education,” including the head of the Kentucky chapter, Beanie Geoghegan.

Lynn Reynolds, Executive Director of Library Media Services, defended the book’s presence in libraries, commenting that this group is imposing their personal beliefs on the district as a whole. She also said it is important for kids to see themselves in books and read  testimonies from two teenagers who had read “Gender Queer.” Reynolds was also concerned about the precendent banning “Gender Queer” might set, specifically in banning books with LGBTQ+ themes.

“If we ban those [books] from the other students that are also struggling with (their identity), if you restrict it, you’re taking away opportunities for a child to live, find his space, find his voice and his purpose,” Reynolds said.

Both Geoghegan and Stovall declined RedEye’s request for comment regarding the meeting.

The District Appeals panel will now go into executive session and has 60 days to issue a ruling.