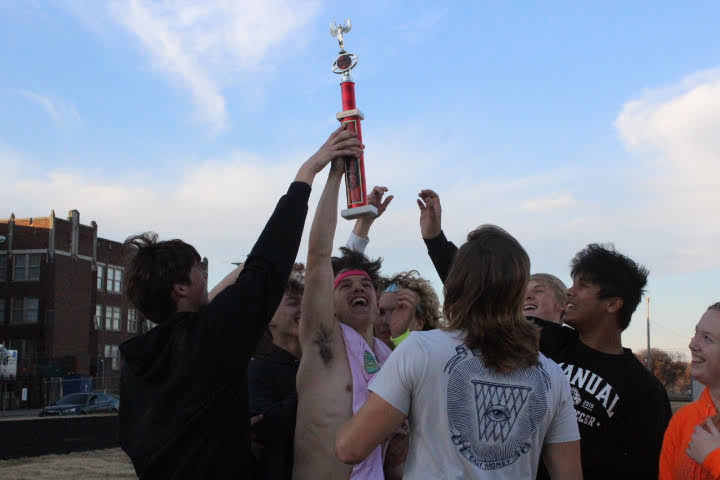 Team Ween raises their trophy in the air after winning the Crimsons Against Cancer kickball tournament. Photo by Morgan David.

Kickball for a cause

The Crimsons Against Cancer hosted their annual kickball tournament.

This article was submitted by Morgan David (10, J&C).

“I think it’s really special to have everyone out here, we’re all such a good group of friends, and to be able to compete against our peers. I think it was extra special to come out here with all our friends and raise a lot of money for a really good cause,” Euan Dunn (12, J&C) said.

The winners received a trophy and five-dollar Chick-Fil-A gift cards.

CAC raised $700 from the tournament, charging $10 per person for each of the seven teams competing. The games lasted four innings or for thirty minutes, and teams consisted mostly of students, but Mr. Jacob Jury (Math), Mr. David Richards (Math) and Mr. Eric Purvis (Math) joined in on the games.

In preparation for the event, CAC advertised on social media, around the school and at the multicultural fair.

“We had to check with the administration, and it was kind of tough because we got turned down a lot. We were going to have it during the multicultural fair, but the teachers said it would be distracting. We really pushed hard to find a time,” Anna Carpenter (10, HSU) said.

Although few made it to the championship, those who didn’t still enjoyed playing in the tournament.

“It was overall a good event and I think it’s a good idea that they set up this tournament for cancer. I hope they keep doing this because it’s a good cause,” Alex Park (10, MST) said.

Keeping up with the good work, CAC plans to host a kickball tournament next year, and has several fundraisers planned leading up to their dance in March.