Countdown to Skywalker: “Return of the Jedi” Review 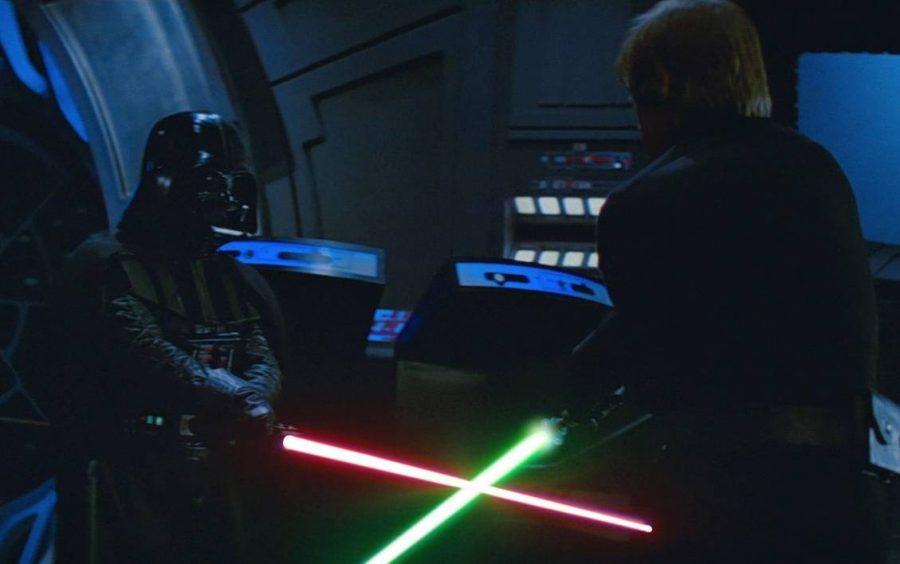 Scene where Luke and Darth Vader have their final duel in the Emperor’s throne room.

The movie that was the cherry on top of the original trilogy, “Star Wars: Episode VI—Return of the Jedi” goes out with a bang, throwing viewers into one of the most epic movie series finales ever. Including giant slug gangsters, an emotionally conflicting lightsaber battle and deadly teddy bears, this movie keeps audiences on the edge of their seat and has continued to do so for 36 years.

In the beginning, we finally see Jabba the Hutt (not the CGI version), one of the most infamous gangsters in the galaxy, where he keeps Han Solo frozen in carbonate as a trophy. From there we see all the characters have reunited—Leia, C3PO, R2D2, Lando and Luke Skywalker, who is now a Jedi Knight. And even one of the coolest villains is back, Boba Fett, the infamous bounty hunter.

This movie also contains one of the most controversial yet popular outfits in cinema history—the “Slave Leia bikini” or as it is now called, “Hutt Slayer.” The iron bikini Fisher sports while in Jabba’s palace has been reproduced, sold at conventions, photos of her have been made into prints, action figures of that outfit have been made and so much more. While it caused Fisher a lot of anxiety, especially earlier designs of it where it revealed even more, there’s no doubt it’s one of the most iconic outfits to date.

This movie brings back the love for the series though and just by seeing the characters again in the first twenty minutes of the film, the nostalgia comes rushing back. Then when you see an unfinished Death Star two point oh, surrounded by Star Destroyers, the infamously catchy tune of the Imperial March booming in your ears as we see Darth Vader’s ship arrive clad in black steel, with his hollow breath, it’s like you never even left the theater of “Empire Strikes Back.”

“Return of the Jedi” was just like the other two films, only we knew it was the end of the trilogy and that we weren’t going to see any of these characters return again after this. This is especially touching when we see Obi Wan’s ghost, and Luke’s final moments with Yoda before the cherished movie puppet passed away.

Although the film was darkened, probably due to the Emperor’s presence in the film, the film was also pretty bright and cheery when we see the rebellion coming together again to fight and destroy the second Death Star once and for all, because we don’t want a third one…

Oh right there will be a third, but that’s for a different trilogy.

And we have to appreciate the Ewoks. There’s just no denying that we all went “aww” when we saw them for the first time. And they really do come in handy during the Battle of Endor. And let’s be honest, we could watch Ewoks fight Stormtroopers all day. In addition, the movie actually features a very famous little actor, Warwick Davis, who has played in dozens of films like “The Leprechaun,” “Harry Potter” and “Willow” just to name a few, and has made his claim in Hollywood known.

“Return of the Jedi” has what could arguably be the best lightsaber battle in the whole series, rivaling Obi-Wan and Anakin’s final fight at the end of “Revenge of the Sith.” It’s well written with the Emperor’s attempt at manipulating Luke to become a Sith Lord by having him kill his father in rage to save his friends.

Next is the fact that we want Luke to beat Vader because we want redemption from the battle in “Empire Strikes Back,” and lastly it has the best score behind it with John Williams making it more dramatic to emphasize the mood and tension of the scene with a gothic choir and orchestra.

With this balance between dark and light, the film was a whole emotional roller coaster that would end what we cannot recreate or refurbish ever again—the original trilogy.

Featured Image Citation: “Star Wars: Return of the Jedi” is by Lucasfilms. This still was released for press and is protected under the fact this is a review and can be used for educational purposes.

Leave a Comment
About the Contributor
Tyler Lericos, Staffer
Tyler Lericos was a staffer for Manual RedEye 2019-20. He loves filmmaking and music composing, and spends a lot of time with his baby brother, Jack. You can contact him at [email protected]