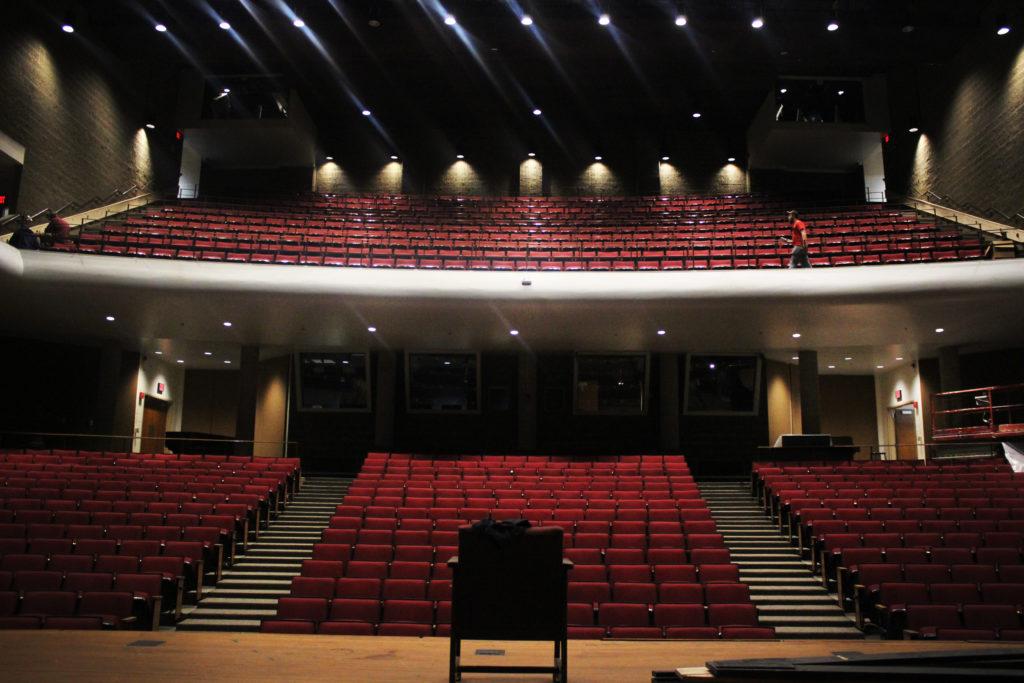 New seating installed to the YPAS auditorium Friday Dec. 2, 2016. These new seats replaced the previous seating that Mr. Krady referred to as “old and dangerous.” Photo by Robert Spencer.

The coronavirus has put students out of school for the rest of the scheduled school year, and will possibly keep us out even longer according to the World Health Organization. It has affected the way students and teachers have to approach education in times where classes are now virtual.

This is hard for a magnet like YPAS, which has many hands-on classes that you can’t learn or develop at home. Despite this, the teachers and staff at YPAS are coming together to help simulate an educational experience for the students to help them improve their craft.

Here’s what each of the YPAS majors are doing to help their students learn their craft from NTI.

YPAS is the largest magnet at Manual. There are many majors within YPAS, like Orchestra, Band, Theater, Musical Theater and Design and Production

Brian Crady, the principal at the Youth Performing Arts School and has shed some light on exactly how YPAS is dealing with their NTI days.

“The structure of YPAS is built upon developing each student through personal growth as a performing artist and collaboration,” Mr. Crady said. “Time in the classroom provides some embedded focus on the history and theory of their craft; while mostly preparing for collaborative performances with their peers.”

“Teachers are reaching out to students through Google Classroom,” Mr. Crady said. “And some are also sending out information through Remind, Twitter, and department web pages as additional sources for students to find.”

Crady explained that students are submitting their assignments as recordings of their practice sessions for all majors to their teachers and receiving general feedback from their teachers.

Mr. Daniel Whisler is both the Music Theory class teachers and the Orchestra Director at YPAS.

For NTI, Mr. Whisler has plans to keep his students practicing and improving.

“Essentially, it’s a fair amount of the students recording and submitting their playing through email or an online storage platform called Collabra,” Mr. Whisler said. “ I also send out a weekly ‘possibility assignment’ video to all my classes that I upload to YouTube – these are taken from the philosophies of Benjamin Zander, a conductor and TED-talk-giver, who is one of my mentors.”

Mr. Whisler also explained how a musicians’ craft is developed in solitude, but this particular situation is missing one of the core elements of development: The reward part. Since all performances have been marked as “suspended” on the YPAS website’s performance schedule, he said, “finding motivation during this time is the hardest element.”

YPAS Piano is a relatively small portion of YPAS, though a very interesting part of the magnet.

Dr. Matilda Ertz is the piano teacher and was careful about preparing for the weeks out of school.

“I have structured YPAS piano NTI so that students know that they should only complete what they are able to,” Dr. Ertz said. “And the first week we were out, I made sure that everyone has some type of instrument to practice on (as much as possible).”

She went on to explain that her assignments would be her students playing, practicing and performing while recording. Then they would submit it to Google Classroom or Via their “brand new” YouTube Channel.

“Everything we do is in Google Classroom or linked there, and my plan for the year is laid out clearly.” She explained. “The best part of NTI has been our (brand new!) YouTube channel (it is not available to the public, in order to protect our privacy).”

Dr. Ertz also expressed how difficult it has been not having actual class and being able to hear the music live.

“It’s not the same as interacting and listening in real life, but it has brought me great joy to see students playing their pieces so well (with frequent pet cameos and unique camera angles!).” She said. “It’s a good way of simulating our class experience.”

Dr. Ertz has been using many tools and programs to help teach her students including video conferencing, their YouTube channel, Google Classroom and others. Even though it’s been difficult to deal with during these NTI days, her classes have pushed through.

Theatre also has a very interesting NTI plan on how they are dealing with being out of school. Brian Hinds is the Theatre and Playwright class teacher at YPAS and says it’s impacted the way theatre majors learn their craft.

“Theatre is all about LIVE performances,” Hinds said. “And recordings and even live streaming just aren’t the same.”

He talked about how the theatre classes are using live streaming and recordings from professional acting companies to try and help students develop their skills. The are also planning to work with the playwriting class.

“A lot of professional theater companies are making recordings of their plays available to stream,” Hinds explained. “And my classes have been watching some and discussing them. My playwrights are still writing plays and getting peer feedback.”

On the other hand, Mr. Hinds said that having classes online could be beneficial to helping students learn about auditioning, which normally takes place as a recording rather than in person.

Design and Production (D&P) is considered the “magnet within a magnet,” having such a large student body, and having different qualities compared to other YPAS majors.

Amy Berry is the head of D&P. She explained how such a hands-on major is dealing with their NTI days.

“We are continuing our current classes (Costume History, Stage Drafting, Stage Lighting and Senior Independent studies) which have been able to shift online semi-easily (with a few exceptions),” Berry said. “It is not the ideal way to learn mostly hands-on concepts but we are working through it.”

She talked about how the classes are now focusing on resumes and sign-ups for positions in next year’s YPAS shows.

“This week we are doing interviews, cover letters and resume activities where students apply for positions in next year’s shows,” She said. “We have a weekly meeting just to hang out/ touch base…Since we normally spend over 20+ hours together after school each week, it is much needed.”

D&P also usually participates in the “Tech Olympics,” a special event that lets students show off their creative and technical skills. Unfortunately, it was canceled, which was a big part of D&P, as well as their other fun activities like their lock-in.

“We are all sad that our big event (Tech Olympics) will not be happening this year,” Berry explained. “And the lock-in that follows is a special treat for D&P majors, and we are missing that, too. The teachers are working on ideas for when we can finally be together again.”

Though the school won’t be meeting back together anytime soon, the staff and students at YPAS are pushing through their NTI days all the same.